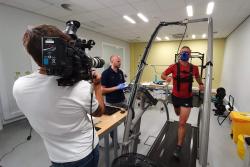 Huw in action in the School laboratories

The Paddy Buckley involves a continuous “round” over 47 peaks in Snowdonia, covering a distance of some 100km and climbing 8,000 metres (almost the height of Everest) all in 24 hours.

As part of his preparation for the challenge Huw visited the School in July and took part in some psychological and physiological testing in order to better understand how he might deal with fear, his ability to withstand pain, and his physical fitness