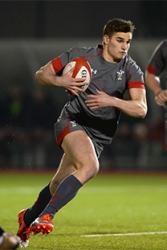 James LangA Bangor University student has been selected to play for the Welsh Students Rugby Union team this season.

James Lang, 20, from Surrey is a second year Sport Science student and recently went through an extremely tough selection process at the Welsh Rugby Union Centre of Excellence at The Vale, Cardiff.

James’ debut with the team was against British Police in March at their first game of the season at Caerphilly Centre of Sporting Excellence, Ystrad Mynach. His next appearance will be against England Students on 6th May.

James has previously played for Scotland U18, Harlequins Academy U18s and currently plays for RGC (Rygbi Gogledd Cymru) based in Colwyn Bay.

Proud to have been selected, James said: “It’s a great feeling to have been selected and to put on the Welsh jersey. This is just one step away from full national honours at U20 level, and eventually I hope that I get offered a professional contract with one of the four regions in south Wales.”

Rupert Moon, RGC General Manager, said: "We are delighted for James to be selected for the Welsh Universities side. He has worked hard over the past season with RGC and established himself in the side, so it is great to see that hard work on and off the field being rewarded.

“RGC aims to develop rugby talent within the region, so this is great news for everyone involved at Eirias.”

The Wales Students set-up was re-established three years ago by the Welsh Rugby Union in conjunction with the Welsh Students Rugby Union, as a key part of the WRU pathway for identifying and developing talent.

The Wales Students programme has grown considerably in the past three years and a number of players have come through Wales Students to represent Wales internationally. Others have played for Wales Under 20 or are now playing Principality Premiership or regional rugby in Wales.