Emily goes the distance in Australia

A Bangor University student has earned herself an international ranking of 24th following an impressive display at the UCI Gran Fondo World Championships in Australia last month – and this despite only taking up cycling in 2013.

Emily Louise Dunn, 22, from Devon and a postgraduate student at the School of Sport, Health and Exercise Science, qualified for the race after completing the Tour of Cambridgeshire Gran Fondo in June. By finishing the 130km amateur cycle race in the top 25% of her age category, Emily was invited to take part in the World Championships in Perth, Australia in September. 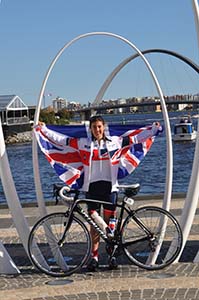 The World Championship road race was based around a route of 105km and included over 4000ft of climbing, making it an extreme challenge of the body and the mind. Added to this, Emily was the youngest competitor within the 19-34 Women category and was competing against some of the world’s best amateur cyclists. Completing the race in a time of 3:40:17 has earned Emily a Gran Fondo amateur ranking of 24th in the world.

Reflecting on the experience, Emily said:

‘The UCI Gran Fondo World Championships were absolutely incredible. Over forty countries were represented, across all age categories and the race itself was really tough. Having the opportunity to race against the world’s best amateurs was an experience I will never forget.’

Emily has now returned to Bangor and is currently undertaking an MRes degree in the field of blood vessel health and is a recipient of an Athena Swan Women in Science Scholarship.