Adam Johnson, a current 3rd year SSHES student, is beginning to make a name for himself in the world of Rugby League refereeing. 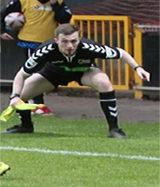 Adam is a member of the St Helens Rugby League Referees Society and in 2018 he was appointed to the following roles:-

-       Touch-judge at the Under-19s Academy Semi-Final between Wigan Warriors and Huddersfield Giants.

-       Touch-judge at the Women’s Super League Semi-Final between Wigan Warriors and St Helens at Robin Park in Wigan.

-       Touch-judge at the National Conference League Division One play-off final between Milford Marlins and Leigh Miners Rangers at the LD Nutrition Stadium, the home of Featherstone Rovers Rugby League Club.

Speaking about the latter match, Adam was quoted by the St Helens Referees Society newsletter for September/October 2018 as follows:-

“This final was one of the most exciting matches I have been involved in as the game was a great spectacle, fitting of the occasion. The scores were level after 80 minutes and Leigh Miners scored the winning points in golden point extra time. Words can’t describe how enjoyable this game was to be a part of, and how thankful I am to have been given the opportunity to do so.” The Society went on to congratulate Adam on his appointment.

On behalf of all in SSHES Adam, a hearty congratulations on your achievements and all the very best in 2019 and beyond.