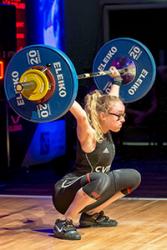 Catrin has had another successful year, moving up to the 53kg weight category and winning the Welsh Seniors in that class, breaking all the current Welsh records. She recently competed at the British Seniors as the lightest and youngest competitor, breaking the Welsh records with her total lifts and pushing herself up the commonwealth rankings. This led to her being selected for Wales to compete in the Commonwealth Championships in Australia in September.

Ashley Metcalfe, British Weightlifting Chief Executive, said: “Catrin has been 100% committed to the sport for many years and despite her age, she is always professional, confident and a pleasure to be around. BWL are truly proud to have Catrin represent us at national level and to be awarded the Young Lifter of the Year 2017 is truly deserved.”

A number of other Weightlifters from Bangor University have also been selected to lift for Wales at the Commonwealth Championships in Australia next month. Student Harry Missangi, a Sports Scholarship recipient; Olympian Gareth Evans, who works at Canolfan Brailsford as a Sports Assistant and is a multiple British Record holder; and Hannah Powell another multiple British record holder who graduated with a Sports Science degree last month. Bangor University is rapidly becoming a great base within the UK, for those who want to take up the sport of weightlifting.

Dave Jones, Health and Fitness Manager at Canolfan Brailsford, said: “Bangor University has now got some very talented athletes training at Canolfan Brailsford which have represented Wales and GB on the world stage. With the recent opening of our great new facility, Platfform81 - which is open to all, we hope this will help athletes with their training to achieve their future goals.”