Following the opening of the Bangor University netball dome in September 2013, North West Wales Netball Development Officer, Lucy Murray-Williams has been working hard to set up a new junior netball club for year 7/8 and 9 pupils.

Staring out with just 3 players in October, the Bangor Netball Club has already grown to a group of 20 players, drawn from Ysgol Friars, Ysgol Tryfan, St Gerards and Hilgrove School.
The club training sessions are led by Lucy who is assisted by students and netball players from Bangor University including Bethan Eades and Anna Orlean-Buchanan who are both students in the School of Health, Exercise and Sport Science. 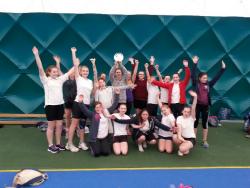 Following a 3rd place finish in the Arfon Junior League in their first season,  the year 7 and 8 players played in the U13 North Wales Under 13 Club competition held at  Maes Glas on Sunday 16th March.

The team came 4th meaning they have qualified for the Welsh Netball National Under 13 Club finals which will be held in Merthyr Tydfil on Sunday May 11th.

Lucy Murray-Williams said:  “this is a great achievement in their first year and having regular access to a dedicated netball facility has made a massive difference to being able to play and train regularly.  The club has already grown to a point where we can enter two teams in the North Wales league next season at U13 and U15 level.”

Bethan Eades from Bangor University Netball club said “we have all played in clubs around the country and being involved with the juniors here has really helped us give something back to the sport.  Quite a few of our team are hoping to be teachers so this has been really good experience.”

The Netball Dome at Bangor University was constructed in the summer of 2013 to provide indoor netball and tennis courts for both University and Community.  The project was part-funded by a Sport Wales “Call4Action” grant aimed at increasing the participation of girls in sport and ensuring that every child has an opportunity to engage in sport outside of school.