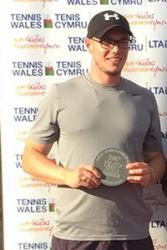 David Stephen Parry, 26, from Caernarfon took the Open Men’s Singles and Open Men’s Doubles titles at the competition where over 150 players took part.

Earlier on in the year, David represented Ynys Môn at the Island Games in Gotland, Sweden and the North Wales County Cup.

Pleased with his recent achievements, David said: “I’ll now be concentrating on completing my PhD, but I’ll also be playing competitively, representing the University at BUCS competitions. I’ve been unbeaten for the last 4 years, so I hope to keep it that way! When time allows, I’ll also be at competitions on the weekends. If possible, I will also compete in ITF sanctioned events as my long term goal is to achieve a Pro ranking point.”

Based in the School of Psychology, David’s PhD focuses on Behaviour Change in Passive Welsh speakers, funded by the Coleg Cymraeg Cenedlaethol.