Tesni Evans, a Bangor University Local Athlete Bursary winner, has added a Bronze medal to Wales’ tally at the Commonwealth Games in Australia, beating Nicol David of Malaysia in a thrilling encounter on the Gold Coast. 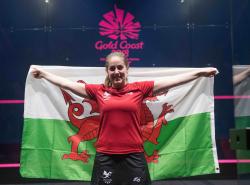 Tesni Evans at the Commonwealth Games

Tesni had reached the semi-final of the Women’s Singles in spectacular fashion, beating Laura Massaro of England in straight-games and recording a second comprehensive victory over the former World No. 1 following her win in the final of the National Championships in February. Despite losing in the semi-final to Sarah-Jane Perry of England, Tesni managed yet another upset in the Bronze medal match by beating Nicol David, a two-times Gold Medal winner at the Games and a certified legend of the modern game.