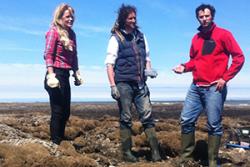 Countryfile presenter Ellie Harrison with research officer Steven Newstead and Dr Andrew Davies of the School of Ocean Sciences.Think of reefs and your mind may wander to blue tropical oceans or the famous Barrier Reef. But reefs exist in a variety of locations- and not all are made of coral…

A reef formed by living animals can be found on intertidal foreshores in various locations around Britain’s coastline.  The reefs created by the honeycomb worm can be very beautiful, as the name might suggest, creating some fantastic shapes and structures, but unfortunately the reefs are very delicate and can be easily damaged by the eager beachcomber.

The BBC’s Countryfile programme (19.00 BBC 1 Sunday 16 June) are visiting a team of scientists at Bangor University who are probably the first to actually grow a honeycomb reef in the laboratory. The work is being done in order to understand how and why reefs decline and to develop ways to help repair damaged reefs. The reefs themselves are very important as they can provide some protection to the coastline, they increase the biodiversity of the area and provide a refuge for other species.

Andrew Davies, who is leading the research at the School of Ocean Sciences, explains: “The honeycomb worm can disappear from a site almost completely, then re-appear and regenerate.  We have been rearing juvenile honeycomb worms in the laboratory with the hope to understand how the reef grows from the initial stages through to the large reefs that we see today.” 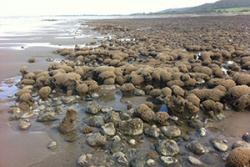 A honeycomb reef at Llanddulas Beach, Conwy County, the focus of the research at the School of Ocean Sciences.He adds: “The honeycomb worm is very sensitive to change and the reef can be easily damaged. Walking over them by an unaware member of the public can cause significant damage to the reefs and in popular seaside areas, the reefs can struggle to co-exist with human activity.”

Steven Newstead, a research officer on the project adds: “We hope that working with Countryfile will bring the beauty, sensitivity and importance of these creatures and their tube homes to people’s attention.”