"Life as an Attorney General of British Antarctica".

"Life as an Attorney General of British Antarctica". 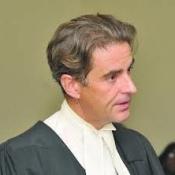 Educated at the University of Wales, Aberystwyth, where he studied Law, he was called to the Bar in 1989 and appointed Queen’s Counsel in 2013. For the last 20 years he has been a tenant at Cornwall Street Chambers in Birmingham.

Between 2008 and 2014, he was Director of the Regional Law Revision Centre in Anguilla.  Set up in 2007 with assistance from the Department for International Development (UK), the Centre now successfully operates without financial assistance and provides law revision services throughout the Caribbean.