Starfish can see in the dark (among other amazing abilities)

This article by Coleen Suckling, Lecturer in Marine Biology, at the School of Ocean Sciences was originally published on The Conversation. Read the original article.

If you go down to the shore today, you’re sure of a big surprise. Many will have witnessed the presence of a starfish or two when visiting the seashore or a public aquarium. Starfish come in an exciting range of colours and sizes, but have you ever given a thought to how this multi-armed wonder manages to exist in our oceans when it’s so unlike the other animals we know?

Recent research published in the journal Proceedings of the Royal Society B not only highlighted that starfish have eyes but also revealed that they can even see in the dark. Starfish may appear rather inanimate, as if they were simple pointy organisms that sit around on the seabed absorbing nutrients from the water. But in reality there’s a lot more going on beneath their spiny exteriors.

Seeing and glowing in the dark 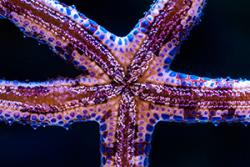 Most starfish possess a crude eye at the tip of each arm. These compound eyes contain multiple lenses called ommatidia, each creating one pixel of the total image the animal sees. Tropical starfish eyes have been shown to be capable of forming crude images, which allow these animals to stay close to their homes.

Now scientists have shown that several deep-sea starfish species, found up to 1km beneath the water’s surface where no sunlight can penetrate, can still see despite the dark. Most species that can see in the dark depths of the ocean like this have more sensitive eyes but see cruder images. But these starfish appear to see more clearly than their tropical counterparts living in the shallows where there is light.

The researchers suggested different reasons for this. Some species appear to see clearly in a horizontal direction but less so in a vertical direction, which would make sense for an organism that lies on the sea floor. Others appear to have less ability to detect changes in what they’re seeing over time.

Two of these visual species are also bioluminescent, which means they can produce short glowing flashes across the surface of their bodies. It’s likely that the combination of these light flashes and the ability to see clearly allows these deep-sea starfish to communicate with potential mates.

Hungry predators, such as fish or crabs, can bite off the arms of starfish. If there is a struggle then some species of starfish will voluntarily break off their own arms, giving the rest of their body time to escape. More amazingly, they can then regenerate a whole new arm. If you find a starfish with one (or more) arm smaller than the rest, it’s very likely that this will be the new regenerating limb.

Starfish don’t have a typical set of muscles. Instead, they are able to move by pressurising seawater inside their body through a water vascular system. They draw in seawater through a porous spot called a madreporite located on the top surface of the body. The water then passes through a series of internal canals to reach the arms, which have thousands of small tube-like feet hanging below them.

Muscles and valves inside each tube foot pressurise water that enable it to extend and retract, creating a walking movement, much like human legs but multiplied hundreds of times. At the end of each tube foot is a tiny suction cup, much like a kitchen plunger, which can stick to surfaces and allow the starfish to gain traction.

Starfish are extremely effective predators on the sea floor, feeding on a wide range of food such as mussels, clams and oysters. They will hunch over their prey and use their tube feet to simultaneously grip the prey and to clamp down onto the seabed to prevent any escapes.

If the prey is small enough the starfish will then swallow the entire animal, internally inflating its stomach, which is located in the centre where the arms meet. While holding this death grip position, the starfish will then gradually dissolve the edible soft tissues using enzymes inside the stomach before ejecting the inedible hard shell parts.

But if their prey is too big to insert into the stomach, this won’t stop the starfish from fighting to get its meal. Instead it will use its powerful arms and tube feet to pull the two shells slightly apart and then eject its stomach into the gap so it can breakdown the soft tissue inside the prey and slurp it up, much like using a straw.

So when you next see a starfish, whether it’s on the shore or in an aquarium, please give it a humble nod for being such a specialised member of our ocean club.