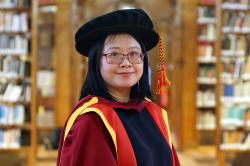 Yang LiDecember has been an incredibly special month for one Chinese student, not only has her research been published in a prestigious journal, but she also received her PhD during the Bangor University winter graduation ceremonies.

After graduating with a degree in English Language and Literature in China, Yang Li, 31 from Henan Province, originally dreamt of becoming an English language teacher. After studying for both her postgraduate degrees in the UK, one in Teaching English to Speakers of Other Languages and the second in Linguistics, she developed an interest in psychology

Following a recommendation from a supervisor to study with Guillaume Thierry, Professor of Cognitive Neuroscience at Bangor’s School of Psychology, she applied to study for a PhD in Psychology under his supervision.

Yang explains: “I researched my options on the internet and found that the School of Psychology at Bangor University has state-of-the-art facilities for conducting behavioural and neurocientific research. During my PhD admissions interview and application process to enrol at Bangor, I found Professor Guillaume Thierry very supportive and friendly. In addition, the School offers every PhD candidate research funding, which we can use to pay participants, and participate in conferences and attendig summer schools. The School also provides teaching opportunities to PhD students. In general, this is a fantastic and dynamic place for conducting research.”

During her studies, Yang worked as a teaching assistant for several undergraduate modules. She had the opportunity to attend a one-week summer school at the University of Birmingham and the School sponsored her to go to Canada for an International conference in 2018. In addition, she assisted Professor Thierry in organising an International Conference at Bangor University in 2018.

The highlight of Yang’s time at Bangor was having her research published in the December 2019 issue of NeuroImage, a prestigious peer-reviewed scientific journal specialised in neuroscience.

‘Back to the future? How Chinese-English bilinguals switch between front and back orientation for time’

Yang and collaborators broke new ground by showing that when they listen to day names in English, native speakers of Chinese unconsciously recall expressions that only exist in their native language and unconsciously accept or reject what they hear depending on whether it refers to the future or the past and whether the sound is played from a speaker situated in the front or the back space. In other words, the brain of bilinguals can resolve highly complex cognitive puzzles involving language, time, and space, entirely outside their awareness.

Professor Guillaume Thierry, Yang’s supervisor and one of the most prolific and highly cited researchers in the School of Psychology, said: “Yang ended up in my lab out of luck and spurious coincidence, when the match between her profile and my areas of interest was loose to say the least. Together with Yang, I think I have run some of the very best studies of my career, including probably the most fascinating experiment we just published in Neuroimage”.

Her four happy years at Bangor culminated this week as she received her PhD, Yang said:

“I’m very excited to have graduated again! I would like to thank my supervisor for accepting me as a PhD student and for providing me with lots of support during my PhD. I am also very grateful to the School of Psychology, which generously offered me a studentship to support my PhD studies. Bangor has opened the door to neuroscience for me, which I really find fascinating. I hope I can become a research scientist in this field.  My four years’ studying at Bangor University have laid a solid foundation for my future academic career.”