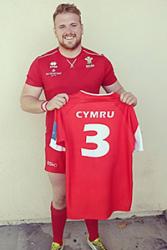 Dafydd JonesA Bangor University student has been selected to play for the Welsh Students Rugby League team for the forthcoming Four Nations competition, which is to be played at Edinburgh University from June 22-30.

Dafydd will be part of a 20-man squad, with 12 currently on the books of Championship or League 1 clubs and further two having made appearances in League 1 in previous seasons.

Thrilled to have been selected, Dafydd said: “I’m over the moon to be selected for this year’s Four Nations tournament in Edinburgh. I hope to carry on a good form and show my skills that I have learned in the past year of playing rugby league. As this is my second season of playing league, it’s all come rather quick with representing North Wales Origin, Wales Dragonhearts, and getting my debut for Halifax RLFC in the 1895 Cup recently.

“I’m looking forward to play for Wales Students and think that as a team, we could be contenders of making it a special tournament for our nation. The coaches and squad have been working hard, and there has been a sense of belief in camp which, hopefully, we can thrive on in the nine days we are there.”