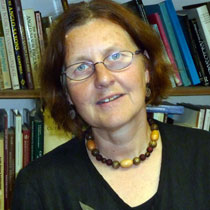 I completed my BA in Archaeology, Ancient and Medieval History at Liverpool University in 1976. I then moved to the University of Durham where I gained a PhD in Archaeology. My thesis examined early medieval sculpture in the Irish Midlands.

My research is multidisciplinary embracing Archaeology, History and Art History. I am particularly interested in early medieval Wales c. AD 400–1100. I also have a continuing interest in early medieval Ireland and Scotland as well as aspects of the history of archaeology.

Much of my research continues to focus on early medieval inscribed stones and stone sculpture in Wales. I am interested not only in the monuments themselves but also in their landscape contexts and what they can tell us about the early medieval society, identity, the Church, patronage and wealth. I have published two volumes of A Corpus of Early Medieval Inscribed Stones and Stone Sculpture in Wales, Volume II, South-West Wales (2007); Volume III, North Wales (2013). My research project with Gary Robinson (Bangor University) and Howard Williams (University of Chester) on the ninth-century Pillar of Eliseg has resulted in my growing interest in monument biography.

I am currently completing a book funded by a Leverhulme Major Research Fellowship on Life in Early Medieval Wales to be published by Oxford University Press.

2016        Edwards, N.,  ‘Perspectives on conversion in Wales’, in R. Flechner, and M. Ní Mhaonaigh (eds), The Introduction of Christianity into the Early Medieval Insular World, Converting the Isles I, Turnhout, Brepols, 85–96.

2001        Edwards, N., ‘Monuments in a landscape, the early medieval sculpture of St David’s’, in H. Hamerow and A. MacGregor (eds), Image and Power in the Archaeology of Early Medieval Britain, Essays in Honour of Rosemary Cramp, Oxford, Oxbow Books, 53–77.

1986        Edwards, N., ‘The South Cross, Clonmacnois (with an appendix on the incidence of vine-scroll on Irish sculpture)’, in J. Higgitt (ed.), Early Medieval Sculpture in Britain and Ireland, Oxford, British Archaeological Reports,Brit. ser. 152, 23–48.

1983        Edwards, N., ‘Some observations on the layout and construction of abstract ornament in early Christian Irish sculpture’, in F. H. Thompson (ed.), Studies in Medieval Sculpture, London, Society of Antiquaries, 3–17.