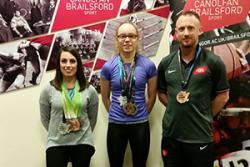 L-R: Hannah, Catrin and GarethA Bangor University staff member, student and local bursary athlete have had a couple of busy months on the world stage in weightlifting.

Canolfan Brailsford staff member, Gareth Evans has competed numerous times at World level. He competed at the London 2012 Olympics and was one of the few people to have produced a double body weight snatch in the competition. He moved up a body weight to compete at the Commonwealth Senior Championships in Penang, Malaysia in October 2016. Gareth’s total resulted in an overall bronze medal, silver medal in the snatch and maintained his number 1 ranking in Great Britain over two weight classes.

Sports Science student Hannah Powell is ranked as the number 1 senior in her weight class in Great Britain. Hannah also competed in the Commonwealth Championships in Malaysia in October. She achieved an overall silver medal, as well as silver in the snatch and clean & jerk. Hannah represented Bangor University in the World Student Weightlifting Championships in Mexico where she secured an overall bronze medal, and silver medal in the snatch as well as silver in the clean & jerk.

Related stories:
Worth her weight in silver and bronze!