Joe Shooman, 41, from Oswestry, has just signed a deal to write a biography of US Pop-punk band All Time Low. The 75,000 word book will be out on Music Press Limited in the UK in spring/summer 2016.

Joe, who is originally from Bangor, is currently in his final year studying for a PhD in Creative Writing within the School of English. This book will be Joe’s sixth published book with previous titles including biographies of Blink-182, MySpace, Trivium, Kasabian and Iron Maiden singer Bruce Dickinson. 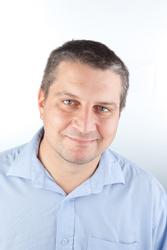 Writer Joe ShoomanHe said: “The new book is a biography of the pop-punk band All Time Low, who have had a 12 year career and have such fervent fans it's hard not to like them.

“I wanted to take a major project like this on as I am part time on the PhD and that enabled me to look at other kinds of work. I find that the two dovetail really well, because when I'm working on one of them I get loads of ideas for the book/project that I'm not working on at that time.”

Joe added: “I absolutely love music and to be able to write about it is a privilege. I have to remind myself of that sometimes when it's pushing midnight and I'm staring at a blank screen, though!”

Before coming to Bangor to study, Joe had been working as a journalist for 20 years, writing mainly for music and entertainment magazines in the UK and abroad. He also worked in music PR for indie labels. Highlights during his career included being the first person in the UK to interview Lady Gaga.  He also interviewed Tom Jones and Lionel Richie. Joe and his wife, Suzy, who is a languages teacher, also lived in the Cayman Islands.

Joe said: “We had the opportunity to live in the Caribbean and we just couldn't turn it down. It really is true about the amazing white sand beaches and clear, warm seas - it's a very special place. After four years there we were wondering what to do next - I'd been working on the local paper - and the opportunity came to think about further education. It appealed to me as a challenge as I've always written stuff but never really had the chance to explore the creative writing aspect. I used to always write fanzines and plays and things when I was younger but it fell by the wayside because of the perennial problem of having to earn money. I thought that if I didn't try and do it now then I might never get around to seeing what else I could challenge myself to do. And it was great to come home after 13 years away to see family and watch Bangor City!”

About the future, Joe added: “At the moment, I'm writing for a few magazines including Record Collector, Bass Guitar Magazine and Bitten, a food magazine from the North West. I also lecture a few hours at Liverpool Institute for Performing Arts on the music press, press releases and how to promote yourself as a band.

“I hope to publish my PhD in the first instance - it's an 80,000 word novel somewhat based on my experiences of being an expatriate on a small island – and following that I hope to work in  publishing, continuing to write and hopefully forge a career in fiction if that is at all possible.”