The short film Not, directed by John Bryan Evans, a former pupil of Ysgol Friars, has been nominated for Best Fiction and Best Welsh language film at Ffresh, the student moving image festival in Wales.

The 12 minute film is about Nia, a young mother in an abusive relationship, whose two young daughters grow up having to watch their mother beaten and bullied. The story is told through the eyes of the children, and has been described as ‘an unflinching look at oppression in the home.’ 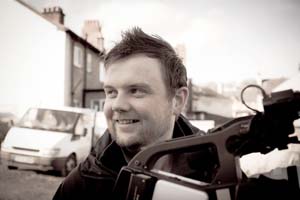 John, 32, from Bangor, is currently studying an MA in Filmmaking after he gained a first class honour degree in Film Making here at the School of Creative Studies and Media.

He said: “I am very pleased to be nominated but I was more surprised at first, particularly with the double nomination. The importance to have your work reviewed, critiqued and ultimately well received in this way is what a developing filmmaker like myself thrives on.

“Not is a difficult film to watch and at times it was difficult to write and film. British film has a long and successful tradition of producing raw social drama so the film’s style was very much inspired and in the tradition of this ethic.

“It would be amazing if Not won. I was nominated last year and it was great to have that feeling of being nominated. But I find I am closer to this film, a cliché but like it is one of my children. I'm very protective of it and at the same time very proud of what we all managed to produce. The crew were amazing and the cast were unbelievable, especially when you consider the difficulty of the subject.

"The School of Creative Studies and Media have also been very supportive.”

The Ffresh event, which showcases, celebrates and inspires students currently studying moving image degrees in Wales, will announce the winners during an event at Glyndŵr University, Wrexham from February 20th to 22nd 2013.

About the film, the judges said: “Lovely clear, strong storytelling with inspired editing during the domestic violence and some extraordinary performances drawn out of very young children by the director. There was a maturity to this piece of work. The direction and editing was skillful and effective. The director achieved an amazing and natural performance by the two young children, which is a talent. The sound was well thought out and very effective. The whole style of the piece was perfectly suited to the subject.”

About his course at Bangor, John added: “To have people like Jo Wright (documentary filmmaker), Jamie Sherry (Screenwriter), Geraint Ellis (Producer) and Mikey Murrey (BAFTA winning filmmaker) guide us all in our development is priceless.”