A conversation about primate conservation 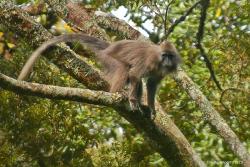 ‘The kipunji (Rungwecebus kipunji) is one of the most threatened primates in the world and is found only in the remote mountain ranges of southern Tanzania.: Photo: © Tim Davenport’As the new BBC One series Primates draws to a close this Sunday (17th May, 8:15 PM BST) primatologists from Bangor University (@BangorPrimates) continue their Twitter coverage of the series on Twitter under the hashtag #BangorDoesPrimates.

In line with this week’s final episode’s focus on primate conservation, they will discuss the potential effects of climate change on primates and examine some of the conservation success stories of our closest living relatives. Bangor’s primatologists will be live on Twitter from 8:15 PM on Friday & Saturday this week, as well as on Sunday night during the broadcast of the final episode of Primates.

The highlight of this week’s #BangorDoesPrimates coverage is the exclusive interview that PhD researcher Zoe Melvin conducted with Dr Tim Davenport, Director of Species Conservation (Africa) for the Wildlife Conservation Society, who led a team that in 2003 described for science a new primate species in Tanzania.

Dr Davenport also appears briefly on screen in the final episode on Primates on Sunday, as he and his team guide conservationist and primatologists Dr Russell Mittermeir on a trek through the Southern Highlands of Tanzania  to see the kipunji.

The kipunji is a relatively large, gregarious primate living in Tanzania, one of the most-intensely studied countries in the tropics, in terms of its biodiversity. So it’s surprising that, until the early 2000s, the outside world beyond the local communities t knew nothing of its existence. The 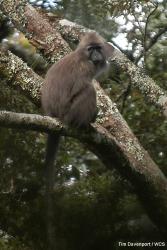 Kipunji: Photo: © Tim Davenportscientific description of the kipunji and the subsequent conservation work of Dr Davenport and his colleagues is one of the more inspiring stories of primate research and conservation at a time where such stories are few and far between.

Dr Davenport recalls: ‘We kept hearing this word “kipunji”. We initially didn’t know what it was … they described vaguely this animal but it didn’t seem to fit anything that I knew or that we knew… In late 2003, we first saw this animal and it was pretty clear straight away this was something very interesting, very different, quite new.’

What followed was nothing short of a primatological sensation: in 2006 a new, large species of primate became the first since the 1920s to be assigned to its own primate genus as it was announced to the scientific world   and the public. Since then Dr Davenport and his WCS team in the Southern Highlands of Tanzania have continued to monitor the population of this critically endangered species, of which only a little over 1,100 remain.

For many primatologists seeing the kipunji in the wild is a particularly exciting prospect. Zoe Melvin, who is in the 2nd year of her PhD studies in Conservation Biology at Bangor, works with her co-supervisor Dr Davenport in Zanzibar but she is yet to visit the Southern Highlands. ‘I would love the opportunity to see the kipunji in the wild and hopefully one day I will. The story of this species inspires hope that little pockets of nature are still left to discover.’

Zoe adds: ‘I think my passion for conservation comes from a love of animals and a longing to leave the world in a better state than when I arrived. This has guided me through my career so far and has lead me to my PhD in Conservation Biology at Bangor University, a university carrying out world-renowned conservation science. I am conducting research on the Zanzibar red colobus in collaboration with Tim and the WCS - Tanzania Program. It is fantastic to learn from such an experienced and prominent conservationist during my PhD. I hope that this will help me to pursue a career in conservation in the future.’ 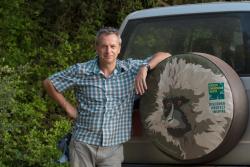 Tim Davenport of the Wildlife Conservation Society.In the wide-ranging interview that Zoe Melvin conducted for Bangor University, Dr Davenport discusses a suite of issues in wildlife conservation from his perspective of having lived and worked in East Africa over the last 30 years.

Despite many setbacks for conservation and environmental protection he remains optimistic, even in light of the current COVID-19 pandemic: ‘If I wasn’t an optimist, I really shouldn’t be in this job so yes I am. Clearly there will be big changes, clearly there’s still a huge amount to do… you’ve got to look for silver linings. There’s little, if anything, good to say about the state of the world at the moment in terms of this disease but I hope at least that it gets people thinking more clearly about humans’ engagement with the natural world. It has to. This will happen again. If ever we need to learn from a situation it’s now.’

You can watch the full interview with Dr Tim Davenport on Bangor University’s YouTube channel: https://youtu.be/3OqtqUuJLGM.

Join Zoe Melvin and the rest of the @BangorPrimates team this week as they conclude their coverage of Primates under the hashtag #BangorDoesPrimates.