This article by Dr Sara Louise Wheeler, Lecturer in Social Policy (Welsh medium) at the School of Social Sciences was originally published on The Conversation. Read the original article.

Looking back at the films released in 2017, and those honoured at the Oscars, it is quite remarkable to note the prominence of signed languages. Three 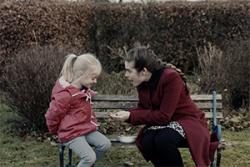 films in particular stand out for their sensitive portrayals of signed languages as bona fide languages: Baby Driver, The Shape of Water and The Silent Child. Two of these films, Baby Driver and The Silent Child, also make an important contribution – both onscreen and off – towards recognising and respecting Deaf culture, identity, and community; they both have Deaf actors playing characters that demonstrate the importance of signed languages in their everyday lives.

Baby Driver – which had two of its three 2018 Academy Award nominations for sound editing and mixing – contains a beautiful portrayal of American Sign Language (ASL) and its role in everyday life. Central character Baby/Miles and his Deaf foster father Joseph, discuss relationships, Baby’s involvement in criminal activity, and the slightly more mundane topic of preparing dinner to Joseph’s liking.

Baby Driver is also a landmark film because actor CJ Jones, who plays the role of Joseph, is Deaf and native to ASL. Studios often cast hearing actors in Deaf roles, but writer and director Edgar Wright stated that, having auditioned Jones, he found watching hearing actors pretend to be Deaf “difficult”. This is an interesting point in terms of cultural appropriation of Deaf identity and has been the subject of campaigning, including #DeafTalent. Meanwhile, Ansel Elgort, who played Baby/Miles, undertook lessons in ASL in order to “do it justice”.

The Shape of Water

The Shape of Water, which took four of the 2018 Academy Awards including best picture, is a magical realism tale, which follows a janitor at a government laboratory as she falls in love with a humanoid amphibian creature being held there. While protagonist Elisa Esposito (played by Sally Hawkins) is not deaf, she is unable to verbalise. So Elisa communicates exclusively through ASL with her co-worker Zelda Delilah Fuller (Octavia Spencer), neighbour Giles (Richard Jenkins), and her amphibian lover (Doug Jones) who also cannot verbalise.

Through the unfolding love story, and her conversations about it with her friends, the power of ASL as a full and vibrant language is demonstrated. Elisa befriends the creature and teaches him ASL, as one would any language. She begs and convinces Giles to help her rescue the creature, conveying the depth of her emotional attachment and love. Having copulated with the creature, Elisa confides in Zelda the intimate and explicit details of the encounter. All of this complexity of everyday life is conveyed through ASL.

In an interview, Hawkins explained that Elisa’s signed language was a deliberate mixture of period-specific ASL and an “amalgamation of things Elisa would have cobbled together "because of where she’d probably have learnt it”. This is a good representation of the reality of many signers in this period and beyond. Signed languages were historically suppressed worldwide, in favour of lip reading and use of voice. 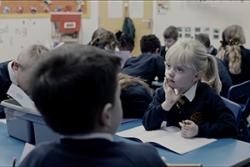 The Silent Child, which was awarded best live action short film at the Oscars, conveys the isolation and dissociation of a profoundly deaf child, Libby, living with her hearing family, who assume she “follows things really well”. However, as we witness a family meal through Libby’s eyes, we can begin to appreciate that this is far from being the case. The situation improves with the arrival of a social worker, Joanne, who teaches Libby British Sign Language (BSL), enabling her to communicate and express herself. However, the film ends on an uncertain and emotional note, as Libby’s parents decide to cease her BSL sessions.

The film’s main character, Libby, is played by six-year-old Deaf actor Maisie Sly, a native to BSL. Rachel Shenton, who wrote and starred in the film as Joanne, made her Oscar acceptance speech in BSL.

The Silent Child is pro-BSL, while still illustrating the tensions between hearing and Deaf cultures, as BSL is still seen by many parents as a threat to family communication.

So, the films of 2017-18 have placed signed languages centre stage and generated much debate. But while attitudes towards them and Deaf culture may be improving, there is still a long way to go before anything nearing equality is achieved. It is thus gratifying to learn that the team behind The Silent Child are planning a full-length movie follow up, amid campaigning for children to be taught BSL in schools. Let’s hope that the momentum from this year can be maintained and built upon.

This article was originally published on The Conversation. Read the original article.