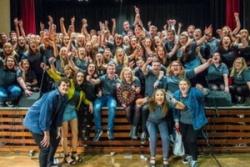 Victorious Bangor Students.: Image: Aled LlywelynFollowing a weekend of competition, Bangor University were victorious at the Inter-Collegiate Eisteddfod 2018, winning for a third time in a row.

The Eisteddfod is a highlight for Welsh students in Wales, and this year it was held for the first time at Lampeter by the University of Wales Trinity Saint David.

Osian Owen, a student of the School of Welsh at Bangor University was the winner of both the Chair and the Crown.

Osian said: "Winning both the Chair and the Crown came as a shock, but it was a privilege to receive both awards in the company of my closest friends. It was also a privilege to be judged by the experienced poet, Tudur Dylan."

A student from the School of Music, Alistair Mahoney won the Musicians' Medal and Nia Hâf, a student at the School of Welsh won the Drama Medal, with both winning for the second year in a row. 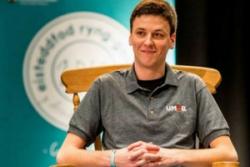 Osian Owen - winner of the Chair and the CrownElen Hughes, a member of Cymric, a UMCB society said: "It will be difficult to have another weekend as amazing as this one. We will look back on our time at University with very fond memories, and of our ability to win the intercollegiate hat trick.

"Seeing Osian win both the Chair and Crown was a very proud moment for us all. The mime, dance, and the SATB choir were my personal highlights. Without doubt, this is a period within our academic year where everyone comes together with the same goal - to return home to Bangor with the shield."

Gethin Morgan, a member of Cymric and UMCB President Elected for 2018/19 said: "What a weekend! The Inter-Collegiate Eisteddfod was a very special one for Bangor this year, with someone on stage for each competition. Being a part of winning the hat trick will be an everlasting memory and thanks those involved for working so hard. My personal highlight was singing and winning the Choir competition."

UMCB President Mirain Llwyd said: "A huge thanks to all at Bangor, especially those who made all the arrangements, the hard work has paid off. Also, I wish to thank everyone involved be it individually or as a group. The passion was evident in all the performances and being a member of UMCB is something everyone was proud of throughout the day. It’s great to bring the shield home for the hat trick! Thanks to all of you, and huge thanks to Trinity for organising a great Eisteddfod. My highlight of the weekend was Osian winning the Chair and Crown – what an amazing achievement!" 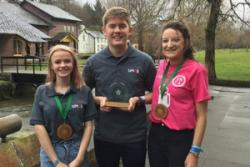 L-R: Nia Haf, Bangor, Drama Medal Winner; Alistair Mahoney, Bangor, Musicians' Medal Winner & Non Jones, Aberystwyth, Art Medal winnerThe Inter-Collegiate Eisteddfod is considered as one of the main social and cultural events calendar for any student or Welsh learners studying in Wales and also for those of Welsh societies based beyond Wales’ border.

In addition to the Stage and Homework competitions, an inter-collegiate Sports Gala, which included Rugby, Football and a Netball 7-a-side competition was held. The grand gig on Saturday night featured a number of Welsh bands, which included DJ Garmon, Gwilym, Fleur De Lys ac Y Cledrau.

The Eisteddfod has, over the years, provided a platform to promote the talents of a large number of students, a tradition that will doubtless continue in the future.