A man of many words: a film profile of poet Gwyn Thomas 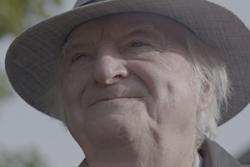 Welsh poet Gwyn Thomas is so much more than just a poet. He's an academic, a writer, an expert on Welsh myths and legends, a screenwriter, a prolific author who appeals to all ages, a husband – father – and grandfather, a friend, a true Welshman, who's also proud of his deep roots in his beloved Blaenau Ffestiniog, and above all else, a gentleman.

S4C will take an exclusive look at his life on Tuesday, 1 March in Gwyn Thomas: Gŵr Geiriau. On St David's Day, we'll celebrate a career which has contributed so profoundly to Welsh culture, and follow Gwyn Thomas as he asks where poetic and creative inspiration comes from.

As he looks at his own work, and the works of other artists, Gwyn wonders if the same driving force inspires sculptor John Meirion Morris and singer Gai Toms, the artist Gareth Parry and composer Owain Llwyd.  Through a series of fascinating discussions, we take a fresh look at the works of these artists and Gwyn's own career.

"It is everyday things which inspire my poetry; things I see on the street, TV programmes, people in general, and different places," says Gwyn, who is 79 and lives in Bangor.

Although, on the one hand he's a public figure, on the other Gwyn is a humble man. His journey starts in Blaenau Ffestiniog, where he was brought up - a place which is still close to his heart.

"It was quite a scary experience at first. Sitting in front of a camera isn't a particularly comfortable experience, but the crew were very friendly and made me feel at ease," says Gwyn, who was born in Tanygrisiau in 1936. 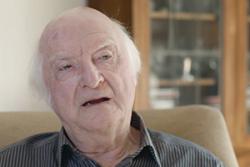 "In Gwyn Thomas: Gŵr Geiriau we'll look into a variety of things that interest me, but it's not autobiographical. We'll look again at some of my work. I return to Blaenau quite regularly, but the town has changed quite a lot since I lived there, I hear more English spoken nowadays, but saying that it's still a Welsh-language heartland. People like Gai Toms keep the language alive in the town.  Blaenau Ffestiniog is full of chapels, but only a handful are still open, but the chapel where I used to worship, Carmel, Tanygrisiau is still open."

Gwyn was a Professor at the School of Welsh in Bangor University for many decades, and inspired thousands of students. We'll visit the university which has changed dramatically since Gwyn was appointed in 1961. Gwyn said, "It's changed quite a bit, and the university has grown considerably. Its size has made a huge difference to the place. When I first started the university was quite small in comparison."

Gwyn has spent most of his life in Bangor and Blaenau Ffestiniog – apart from a short stint studying at Jesus College, Oxford – but his horizons extend much further than north Wales. In its time his academic work, as well as his poetry, was ground breaking and Gwyn admits that both complement each other, "Being imaginative is vital in any research. Take the Mabiniogi, it's full of imagination."

In his home-town of Blaenau stands a monument engraved with Gwyn Thomas' poetry, "At least," he says, "in future, if no one reads my work, these words will still be seen on this monument."

But there's no doubt that his words will survive and be read in the future. Gwyn Thomas has inspired generations of people, and continues to inspire many through his words. Tune in to Gwyn Thomas: Gŵr Geiriau to follow the path of a great and talented man, and to celebrate his huge contribution to Welsh and world culture.

A Cwmni Da production for S4C