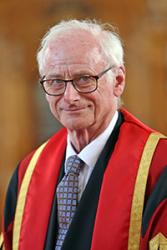 Gwilym Rees-JonesEvery year Bangor University’s Alumni Advisory Board considers candidates and advises the University on an Alumnus of the Year award.