A book written by a Senior Lecturer from the School of Welsh has been shortlisted for 2014 Wales Book of the Year Award.

Ffarwél i Freiburg: Crwydriadau Cynnar T.H. Parry-Williams (which translates as Farewell to Freiburg: Early wanderings of T.H Parry-Williams) by Dr Angharad Price delves into the poet’s early years and the fundamental influence it had on his poetry and writings. 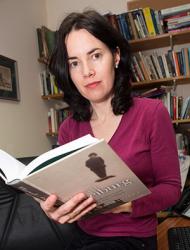 The book follows the life and work of T.H Parry-Williams between 1887 and around 1919. It covers the period when the writer left home to go to secondary school, and the experience of being a conscientious objector during the First World War.

“Whilst residing in Freiburg, Germany, T.H Parry-Williams attended psychology lectures, and at the time it was a relatively new university subject.” said Angharad Price.

“This had an obvious influence on his work and there is also evidence that the German language had an impact on him - in the way he combines words to form new words."

There are nine books on the Wales Book of the Year Shortlist this year; three Fiction, three Poetry, and three Creative Non-fiction.

The Wales Book of the Year Awards Ceremony will be held at Galeri, Caernarfon on July 10th.