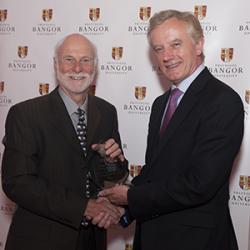 A new type of maize seed which has benefitted several hundred thousand farmers in western India scooped the prize for Cultural & Societal Impact. The new maize has significantly increased yields and improved food security and now represents 80% of the maize seed production in Gujarat since its release in 2002.

The seed was bred by Dr John Witcombe of the Centre for Advanced Research in International Agricultural Development (CARIAD) at Bangor University with partners the Gramin Vikas Trust (GVT), KRIBHCO Bhavan, NOIDA, New Delhi and Gujarat Agricultural University (GAU), India. The aim was to develop a seed suitable for cultivation by resource-poor farmers in the western Indian states of Gujarat, Rajasthan and Madhya Pradesh. These farmers grow maize on poor soils with little or no fertilizer in highly drought-prone areas, meaning the cultivation of crops such as maize is precarious. 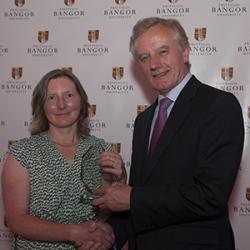 The Centre has an international reputation for excellence and leadership and was the first university based mindfulness centre in the UK, and established the first Master’s programme in this emerging field.  The Centre’s work is impacting on policy and the provision of services locally in north Wales, across the UK and in Europe and America. The Centre has projects with a large number of local organisations in north Wales as well as many further afield and internationally

The ‘Train in, not select out’ project run by Professor Lew Hardy at the Institute for the Psychology of Elite Performance, School of Exercise Sciences won the prize for ‘Best Improvement in Business Performance and /or Outstanding Innovation’.

Over ten years of research and implementation, in partnership with the British Army Recruitment & Training Division, has led to changes in the delivery of training across the three UK Armed Services, the formation of a new training establishment, the formation of a new tri-service monitoring and training body, better mental health in military recruits, and significant reductions in wastage (attrition) rates (up to 15%). 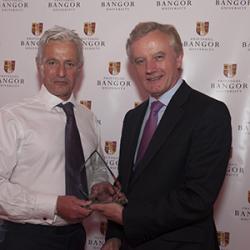 Prof John G Hughes presents the ‘Best Improvement in Business Performance and /or Outstanding Innovation’ Award to Prof Lew Hardy.The Bangor model developed by this research has also been utilised by the Canadian and US armed services.  The project addressed high wastage due to failure or withdrawal of recruits, an element which has always been a problem for the Armed Services. A model developed and promoted within the Recruitment & Training Division reduced wastage by using enhanced training practices. The research, funded by the Ministry of Defence, focused on the benefits of training non-commissioned officers involved in the delivery of recruit training in transformational leadership and coaching skills.

Commenting on the event, Professor John G Hughes, the University’s Vice-Chancellor said: “At Bangor University we are combining knowledge creation of international excellence with innovation to ensure that our research benefits others.

“The research and enterprise activities carried out at the University play an important part in improving the economic and social wellbeing of Wales and the world.  The projects highlighted by these awards illustrate the positive impact that the University has on the economy and society.”

Professor Jo Rycroft-Malone, Bangor University’s Director of Research said: “Our impact awards showcase the University’s work and celebrate our successes. In this first competition the panel considered over 20 applications. The competition was very strong, and we recognise the wealth of talent we have across our University.  The stories that out finalists tell provide inspiration and highlight the difference that Bangor University research makes”.