In July Dr Alison Mawhinney, Reader in Law at Bangor Law School, travelled to Geneva to address the UN Human Rights Committee on the question of freedom of thought, conscience and religion. The UN Human Rights Committee is the UN’s highest human rights body and is charged with ensuring that countries fulfil their obligations under the UN International Covenant on Civil and Political Rights. Every country that signs up to this key human rights treaty must appear in front of the Committee every five years to be questioned on aspects of its human rights record. 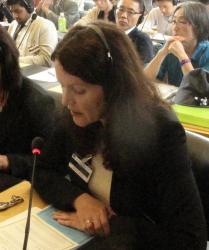 This year it was the turn of Ireland. Dr Mawhinney, who has written extensively on freedom of thought issues, submitted written and oral evidence to the Committee. She argued that Ireland was in breach of its obligations in two key areas to do with Article 18 of the Covenant - the right that protects freedom of thought, conscience and religion. First, Ireland’s failure to provide for non-religious schools meant that non-Christian children were forced to attend Christian schools where a religious ethos had to ‘permeate’ all subjects as well as the school day. Second, the constitutional obligation placed on judges and the President to take a Christian oath before taking up office violated the right to freedom of religion or belief of non-Christians.

In its questions to the Irish Minister for Justice and Equality, the UN Human Rights Committee drew substantially on Dr Mawhinney’s arguments and evidence. The Committee’s all-important ‘Concluding Observations’ demanded that Ireland ‘take concrete steps’ to amend its Constitutional provisions that require religious oaths to take up senior public office positions. With respect to the situation in schools, the Committee instructed Ireland to introduce legislation to prohibit discrimination in access to schools on the grounds of religion, belief or other status, and to ‘ensure that there are diverse school types and curriculum options available throughout the State party to meet the needs of minority faith or non-faith children.’ Ireland now has five years to implement these recommendations.