Bangor Law School has made history by becoming the first team ever to represent Wales at a world-renowned mooting competition. 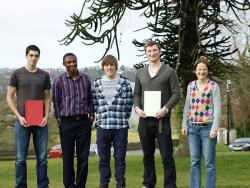 Law students (L-R) Andrew Jones, Damian Etone, Adam Gulliver and Cathal McCabe will represent Bangor University and Wales at the famous Telders International Law Moot Court. They are pictured here with mentor Dr Evelyne Schmid.Court – the most famous contest of its type in Europe – held at the seat of the International Court of Justice in The Hague.