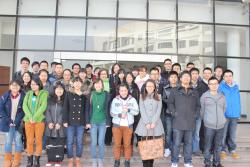 Professor Linton was invited to design and teach the first ever International Criminal Law course for undergraduates at Zhejiang Gongshang University School of Law, Hangzhou. 42 students took her course, delivered in English, over three weeks from November to December 2012.

Following the successful conclusion of her course, Professor Linton delivered a public lecture at Zhejiang Gongshang University on one of her major research projects, ‘Hong Kong’s War Crimes Trials, 1946-1948’. She discussed how her research has brought to light a forgotten process of accountability for war crimes, and which has, among others, led her to create an online database and write an overview article recently published in the Melbourne Journal of International Law. Professor Linton’s book on the subject, commissioned by Oxford University Press, will be published in 2013. 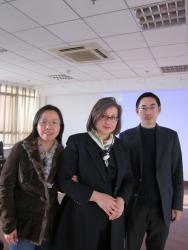 Professor Linton with Professor Ye and Professor Song Jie of Zejiang Gongshang University Law School after her public lecture on ‘Hong Kong’s War Crimes Trials, 1946-1948’Moot Competition, held at Wuhan University from 8-10 December 2012. Professor Linton delivered a public lecture at Wuhan University’s Law School on ‘Evolving approaches to human rights in armed conflict’, discussing fresh approaches emerging from the European Court of Human Rights in Strasbourg. She had the privilege of judging the final round of the 3 day moot competition, along with Hon. Justice Liu Daqun of the Appeals Chamber of the International Criminal Tribunals for the former Yugoslavia and Rwanda, and Mr. Richard Desgagne, Regional Legal Adviser for East and South-East Asia for the International Committee of the Red Cross (ICRC). Professor Linton has previously judged the final round of the 4th China International Humanitarian Law Moot Competition, held at Renmin University Law School in Beijing in 2010.