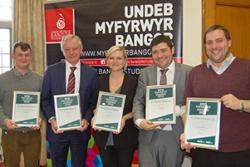 Bangor Students’ Union won the Students’ Union of the Year award in recognition of their wide-ranging work during the year in areas such as academic representation, student activities and inclusivity. NUS particularly commended their work on community engagement and organising, referencing the 'Love Bangor Community Partnership' as an example of the Students' Union's commitment to ensuring that students are active members of their local community, and not just 'academic tourists'.

The Diversity award was given in recognition of the SU’s work, in partnership with some of their student groups, have done on LGBTQ+ issues and efforts made to ensure that their activities and services appeal to, and reflect the diversity of their membership. This campaign was further expanded during the 2015 Sports Varsity event, where all competing teams wore rainbow laces to illustrate that sport at Bangor is a welcoming environment for LGBTQ+ students.

They were given the Student Opportunities award in recognition of the success of the 'Summer Sessions' project which provides a route into mainstream activities and involvement for post-graduate and international students.

The SU also won the Education award for their work on course reps scheme, their annual student statement, which has been picked up by the Quality Assurance Agency as an example of national best practice, and for course rep involvement in School internal quality audits.

Additionally, Danielle Barnard was runner-up in the SU staff member of the Year category for her innovative and dedicated work on academic representation. The SU were also highly commended in the Campaigns category for the work undertaken in partnership with the University’s Postgraduate Society.

Professor John G Hughes, Vice-Chancellor, said: "The success of the Students’ Union in winning these awards reflect the hard work they do on behalf of the University’s students throughout the year, and we are very pleased to see this work recognised at a national level.

“The University works in partnership with the Students’ Union to ensure that Bangor students have a fantastic experience during their time here. I am particularly pleased with these awards as they follow a remarkable year for Bangor, which has seen the University ranked first in Wales and 14th in the UK in the Times Higher Education Student Experience Survey and ranked in the top 100 Universities in the world for its international outlook.”

“Many congratulations to everyone involved.”

“We’re extremely proud of our achievements as a student body and as an organisation. We are very pleased to have won these national awards. These are in addition to being recognised by HEFCW and the QAA for our work in academic representation over the last two years for innovative sector leading work.

“Our focus in recent years has been on opening up our services to students, academic representation led by students, and improving access to extracurricular activities to allow students to shape and enhance their own student experiences. Winning these awards is a testament to the work of the Students’ Union and the students involved in activity right across the organisation.

“We’ve ensured that students are at the heart of the design, development and review of their education. We’ve removed barriers to participation by introducing free clubs and societies with targeted events for international and postgraduate students. We’re campaigning to eradicate homophobia and transphobia in sport and we’ve led on research into LGBTQ+ students’ experiences of higher education, and our work on education forms the direction of University policy and development each academic year.”