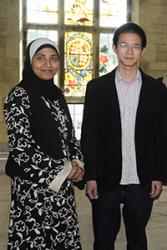 Chevening Scholarships are the UK government’s global scholarship programme, funded by the Foreign and Commonwealth Office (FCO) and partner organisations. The programme makes awards to outstanding scholars with leadership potential from around the world to study postgraduate courses at universities in the UK.

Bangor University received over 400 applicants from over 70 countries competing for the three Chevening Scholarship studentships on offer for the coming academic year. The Scholarships enable the students to study a Master’s degree that falls within the priority development areas for each individual country.  The Scholarships will be available for three years, meaning that nine students will be studying at Bangor University under this programme.

Students applying to Bangor University are likely to be attracted to the University’s leading expertise in Human Rights Law, Public Procurement and Good Governance and Environmental Management. These are considered ‘priority areas’ and also fall within Bangor University’s areas of particular expertise. 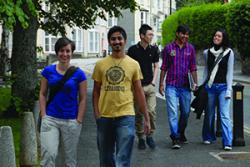 “Bangor is honoured to join forces with the Foreign and Commonwealth Office to offer these dedicated and prestigious Chevening Scholarships. Every University has a role to play in fostering good relations worldwide, and through partnering with Chevening, Bangor University can empower students to play a full part in the social, economic and political development of their country.’

Applications were received from a range of countries including Zambia, Yemen, Montenegro, Indonesia, Argentina, Bangladesh, Belize, Philippines.  The new students will arrive in Bangor in September 2014.

Established in 1983, the Chevening Scholarship scheme welcomes students from 118 countries worldwide (excluding the USA and the EU). Over 42,000 past Chevening Scholars around the world represent an influential and highly regarded global network.

The University already hosts a number of Chevening Scholars outside this new agreement. Current Chevening Scholars at Bangor University include a Malaysian student studying an MA in Islamic Banking and Finance and a Chinese student studying for an MSc degree in Banking and Finance at the University’s London Centre. A student from Cameroon completed studies in International Human Rights Law and International Criminal Law earlier this year.