Guto Dafydd is the winner of this year’s Daniel Owen Memorial Medal, presented at a special ceremony on the Pavilion stage today. 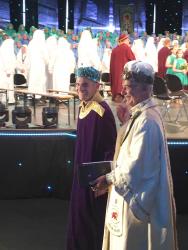 Guto is more than familiar with standing in Eisteddfod ceremonies, having won the Conwy County Eisteddfod Crown yesterday and the Crown at Carmarthenshire in 2014, and the Daniel Owen Memorial Prize two years later at the Monmouthshire festival.

The task of the eight who entered was to create a novel with a strong storyline of no less than 50,000 words.  The prize is the Daniel Owen Memorial Medal and £5,000 donated by Ross and Susan Morgan, Llanrwst, and £5,000 (£3,500 in memory of Olwen Mai Williams, Foel, Cwm Penmachno from her family, £1,000 Gwasg Carreg Gwalch, and £500 from the D Tecwyn Lloyd Trust).

The adjudicators were Haf Llewelyn, Dyfed Edwards and Llwyd Owen, and delivering the adjudication from the stage, Haf Llewelyn said, “There was only one in the race, and the three of us were in full agreement – Carafanio – Arglwydd Diddymdra.

“Having experienced mixed emotions going through the other seven entries, we were rather worried, as we wanted Conwy County to have a winner!  But then, we turned to the first pahge of Carafanio, and we were engulfed by a huge sense of relief.

“This writer is way ahead of everyone else in the competition.

“The novel is a reflection on life, a reflection on those things which worry us, but there is no wallowing in ankst or pain, ony telling it as it is, cynical and satirical.  This is the story of a family going on a caravanning holiday, there’s no big story or mind-blowing events, no gangsters or detectives.  And that’s the greatness of the novel, it’s a story about life – insightful observations about human nature, aspirations and expectations, and about our fragile worldly state.

“The objective style appealed to me straight away, the author almost remotely spying on his text, mocking him, making sharp comments about us Welsh, and humanity more widely.

“Arglwydd diddymdra is also a linguistic acrobat; under his care the Welsh language is sprightly, it can touch every emotion, it is a multi-layered modern language, and is fun.

“Carafanio is an honest, clever, humorous novel - sometimes nostalgic, and in its company, I laughed out loud.  I nodded and responded, I was sad and despairing, but in its company, I experienced prose at its best.“

Originally from Trefor, Guto lives in Pwllheli with his wife, Lisa and the children, Casi and Nedw.

He has read his work in dozens of vestries, pubs, libraries, schools and halls, and regularly discussed literature in a wide range of publications, on television, radio and online.  He has published a number of books, including a volume of poetry (Ni Bia’r Awyr) and two novels (Stad and Ymbelydredd, which won the People’s Choice in the 2017 Welsh Book of the Year Prize).

He graduated in Welsh from Bangor University.  He works for the Welsh Language Commissioner, and is treasurer of Eisteddfod Gadeiriol y Ffôr.  He enjoys running, going for a walk and caravanning.

The Cyfansoddiadau a Beirniadaethau includes the full adjudication for this competition and the winners of all the other composition winners at this year’s Eisteddfod.  The volume is published at the end of the Chairing Ceremony on Friday afternoon.