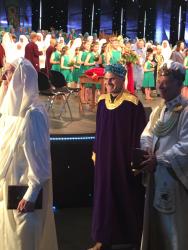 The young poet from Pwllheli came out top in a competition which attracted 29 entries.

The Crown, sponsored by housing association, Grŵp Cynefin, is presented for a sequence of poems not in cynghanedd, of no more than 250 lines, on the subject of Cilfachau (inlets). The adjudicators are Manon Rhys, Ceri Wyn Jones and Cen Williams.  The prize money is donated by John Arthur and Margaret Glyn Jones and the family, Llanrwst.

Delivering the adjudication on behalf of his fellow judges, Ceri Wyn Jones said, “This was a strong competition, and it’s a great shame that I won’t be able to talk about more than four poems, Fersiwn Arall, OS, Saer nef and the Priddyn Coch.  It’s fair to say that these others were within grasping distance of the Crown, Mab for poems on losing a father and Non for a collection of poems on Brittany.  Do please buy the Cyfansoddiadau a Beirniadaethau on Friday to find out more about this excellent competition.

The four are praised in Ceri’s adjudicators, and coming to a final decision was an obvious challenge.  Turning to Saer nef, Ceri says, “You could say that Saer nef is verging on rejecting a self-conscious poetic style, in case it stifles his ability to have his say: it’s a chattier and direct style, sometimes raw and quite slapdash, sometimes deceptively elegant, but it all sounds so natural, even the less refined colloquial language.

“This different voice challenges, provokes and shakes us.  It makes us laugh and cough.  And even if not always serious, this, like OS, is a real poet.

“Manon Rhys wants thee Crown to go to OS, with Non, Fersiwn Arall and Mab hot on its heels.  Cen Williams wants Saer nef to be crowned, with the Priddyn Coch and OS closely following.  Saer nef and OS are Ceri Wyn Jones’ winners, but from the thinnest whisker ever seen in the history of thin whiskers, Saer nef is in front, OS second, and the Priddyn Coch and Fersiwn Arall snapping at their heels.

“For poems which entertain us, make us feel uneasy and excite us, this year’s Crown goes to Saer nef, and the three of us warmly congratulate the winner.”

Originally from Trefor, Guto lives in Pwllheli with his wife, Lisa and the children, Casi and Nedw.

He has read his work in dozens of vestries, pubs, libraries, schools and halls, and regularly discussed literature in a wide range of publications, on television, radio and online.  He has published a number of books, including a volume of poetry (Ni Bia’r Awyr) and two novels (Stad and Ymbelydredd, which won the People’s Choice in the 2017 Welsh Book of the Year Prize).

He graduated in Welsh from Bangor University.  He works for the Welsh Language Commissioner, and is treasurer of Eisteddfod Gadeiriol y Ffôr.  He enjoys running, going for a walk and caravanning.

There are three key elements to the Crown’s design, with three layers of metal outlines creating an exciting and modern image linked to the basic principles of Grŵp Cynefin.

Shapes of stylish houses form the first tier, but they are, of course, more than houses.  These are home to the people and families of the area.  Angela says, “Our culture is maintained through our communities: in these homes our people, our language and our culture thrive. This is the basis of the Crown, the tallest and strongest part. ”

There are triangles in the second tier, a shape with natural strength, representing the roofs of houses, supporting structures against lateral pressures, and representing the sustainability of the area. And to crown each pinnacle is a copper ball, one of the obvious features of Angela's work as a professional jeweller. This copper originated from the old Great Orme copper mines in Llandudno, and a 2cm cube of pure bright copper was presented to the Eisteddfod for use in the Crown’s construction.

The third tier is the county of Conwy, the rural valley and the densely populated coast. The glow that flows through the mountains down the valley and into the sea through the River Conwy is water: it brings its nutrition as an essential container to create a thriving community, environment and landscape, and to ensure a strong habitat for man and animal. Therefore, the flow of water seen in the last layer, is a smooth soft arch to convey the movement of the flow. Along its length, there are droplets of bright water created from a blue - coloured topaz stone as it simulates the colours of the Grŵp Cynefin brand itself.

The Gorsedd of Bards’ Nod Cyfrin, its unique mark, is on the front of the Crown, under the main shape of the roof of the house, which is set to protect it. And at the bottom of the Crown, the words Eisteddfod Genedlaethol Sir Conwy 2019 have been inscribed.

The winning poems will be published on the Eisteddfod website following the ceremony and the Cyfansoddiadau a Beirniadaethau, which includes the full adjudication for this competition and the winners of all the other composition winners at this year’s Eisteddfod will be published at the end of the Chairing Ceremony on Friday afternoon.

The Conwy County National Eisteddfod is held on the outskirts of Llanrwst until 10 August.  For more information go online, www.eisteddfod.wales.