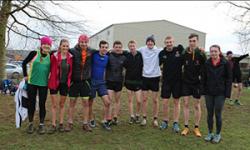 Bangor University Athletics Team after their victory in the Grand Prix North Wales Cross-Country leagueCongratulations to the Bangor University Athletics Team who recently won the Division 1 title for the first time at the Grand Prix North Wales Cross-Country League in Oswestry. The victory came just 12 months after gaining promotion to the First Division.

The North Wales XC league has been going since 1959 and the current members of the Bangor University Athletics Team are the first team from Bangor to ever win it.

Matthew Mason, the club captain and team member explained: “The league has five fixtures from October to February. We had 24 team members representing us in at least one race throughout the season.

“This season it came down to the last race with us and Eryri Harriers going for the title. The Eryri Harriers have won the league for four of the last five years and we eventually beat them by 43 points. No University team has won the title since Aberystwyth in 1972, so we’re very proud to have brought the title to Bangor.”