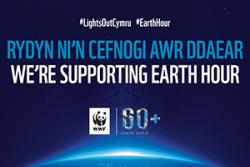 Bangor University is joining the global celebration for our brilliant planet by supporting WWF’s Earth Hour – a spectacular and symbolic lights out event that focuses the world’s attention on our planet, and the need to protect it.

On 19th March, at 8.30pm, Bangor University will be joining forces with thousands of iconic landmarks globally, from The Sydney Harbour Bridge to Times Square in New York, as they show their support. Earth Hour’s unique display of darkness has become a global phenomenon with hundreds of millions of individuals coming together each year.

Last year in Wales, it’s estimated that 500,000 people took part, sending out a united message of support. Participating Welsh landmarks included the Senedd in Cardiff Bay, Caernarfon Castle, and The National Library of Wales in Aberystwyth. 235 Welsh schools signed up and Assembly Members from all parties showed their support.

To celebrate Earth Hour 2016, the floodlights on the main University building will be switched off for the hour between 8.30pm – 9.30pm on 19th March.

"Once again we are pleased to support WWF in this global event. This year marks the tenth anniversary of the first Earth Hour held in Sydney Australia; since then the event has spread to over 170 countries and territories. Raising awareness in this way highlights the role that everyone can play in combatting climate change, through simple and individual actions.”

“We’re delighted that Bangor University will be supporting Earth Hour this year and hope that they’ll inspire many others to get involved. Climate change will have a massive impact on people, wildlife and habitats across the world, and we need to take action to protect them. By taking one simple step to switch off, you’ll be joining millions of people from around the world in this special celebration.”

Everyone can sign up for WWF’s Earth Hour 2016. For more information and to sign up please visit wwf.org.uk/earthhour