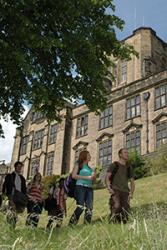 Bangor University has decided to join the many organisations around the world that have declared a climate emergency and calls for urgent action to be taken in order to tackle climate change.

The University, which is ranked eighth in the world for its commitment to sustainability according to an international league table of environmentally friendly institutions (UI Green Metric), calls on Governments around the world to respond as a matter of urgency to the imminent threat posed by the global climate crisis.

“We very much support those calling for action to deal with the climate emergency. At Bangor we have some of the world’s best scientists carrying environment research on land and in the oceans.  Collectively, as a group we are rightly challenged to address the issues pertinent to society in a changing climate.”

“As a scientist who has regularly worked in the Arctic regions, I’ve seen for myself the dramatic changes taking place in the past decade. There can be no doubt that the situation has reached a critical point.”

“Not only are students and young people concerned about the environment, but they have succeeded in raising the public’s awareness and we are proud to support them by declaring a climate emergency,” added Professor Thomas.

Mark Barrow, President of Undeb Bangor said: “I’m very grateful to the university for showing their support, because climate change is a matter of huge concern to students at Bangor, many of which are here studying subjects relating to the environment.

“Many of my fellow students at the University are seeing for themselves the destruction that’s being caused around the world as a result of the droughts and storms that have resulted from climate change. Urgent action is necessary to prevent the situation from deteriorating even further.”