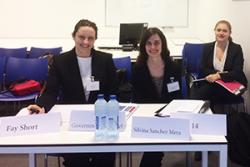 Law students, Fay Short, Silvina Sanchez Mera and Laura Jager (at rear) preparing to compete at the ICC Moot in The Hague.A team of Bangor University Law students have beaten off previous winners and made it through to the semi-finals of a prestigious international competition for law students.

Over three days, the Bangor University team of LLM students Silvina Sanchez Mera and Fay Short and final year LLB student Laura Jager, participated in the preliminary rounds of the competition, seeing off competition from Bond University, Australia, who have won the competition twice in the last six years, and teams from Ukraine, Turkey, Bosnia, Germany, Ghana, USA, Kenya, Afghanistan, Switzerland and Malaysia.  The competition organisers then announced Bangor University’s team among the highest-ranked teams who would progress to the quarter-finals. 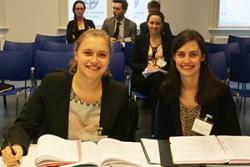 Laura Jager and Silvina Sanchez Mera, with Fay Short in support. “We were delighted to have progressed so far! We faced tough competition in the quarter finals from the University of New South Wales from Australia and Osgoode Hall Law School from Canada, who won the competition in 2010, and have been in the top three four times in the last six years. At this stage, only one team from each round of three can progress to the semi-finals – the top nine teams in the competition - so we were delighted to just make it that far. However, thanks to an absolutely stellar performance from Laura, we won the round. In the semi-finals, following an outstanding performance by Fay, we were narrowly knocked out by the competition’s eventual winners, the Singapore Management University.”

She adds: “Needless to say, I could not be prouder of the team; which also included LLM students, Tahsin Khan and Andra Filimon, who acted as researchers. Silvina deserves a special mention. She was highly commended by the judges for the breadth of her knowledge. Laura, having never studied international criminal law before, only joined the team in March when an original team member departed, and she is now a true expert in the subject! Fay only joined the team six weeks ago, and despite countless other commitments, gave her all to the competition and delivered confident and passionate presentations as though she had been mooting all her life!”