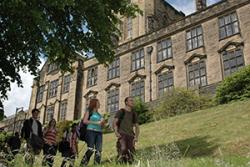 Bangor University has retained its position among the top 350 universities worldwide for the third year in succession according to the Times Higher Education World University Rankings released today (Wednesday 21 September 2016). This success is despite an increase in the number of eligible universities. The latest table ranks 980 institutions from 79 countries, making it THE’s most comprehensive table to date.

With a strong focus on a university’s international research reputation, the results place Bangor University 38th out of the 91 UK universities that meet the table’s criteria for inclusion.

The University’s position among the world’s best universities is the latest of a number of league tables and surveys which reflect well on Bangor University.

The University is 4th in Britain according to the WhatUni Student Choice Awards (April 2016) and is among the top 15 in the UK (of the UK’s best non-specialist universities, the traditional institutions who offer a broad range of subjects) in the annual National Student Survey (2016), rivalling institutions such as Oxford and Cambridge universities by delivering the same levels of student satisfaction for the third year running.

“We have a 130 year tradition of providing excellent teaching and student care, and we take great pride in the quality of both our teaching and our research at Bangor University."

The full listing is available at: https://www.timeshighereducation.com/news/world-university-rankings-2016-2017-launch-date-announced