Good luck to School of Creative Studies and Media graduate Andrew Pritchard! Today (18 March) Andy, from Groeslon, near Caernarfon, finds out if his shortlisted film Snowdonia: open all year is to be successful in the Wales round of the RTS Student Television Awards.

Andy is now earning his living as a freelance cameraman and has been working in London, filming the new Top Gear series, among other work, and has worked abroad for large multinationals such as Nikon and Jaguar Landrover, sponsors of the Rugby World Cup.

He chose a subject close to his heart for his final year film. 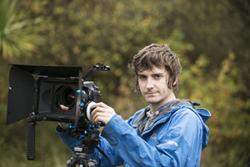 “I chose Snowdonia as the subject for my film as I don’t think the area receives the attention it deserves. I enjoy climbing and other outdoor activities and I wanted to show what a great place we have here.”

“I was surprised to have been shortlisted- I thought that drama or fiction film s would be shortlisted, rather than a promo or factual film.”

Though he has achieved one ambition in making a living working behind the lens, Andy’s ultimate ambition is to make his own film- and he’s a fan of film director Quentin Tarantino.

“Andy is a very talented film maker, and he was responsible for every aspect of this film. His application to his work is notable, and he deserves every success.  Reaching the shortlist for the RTS Cymru Awards is an achievement in itself – there is fierce competition, and it’s great to see the film getting more recognition and attention. It not only shows Andy’s talents but also that Snowdonia is such a fantastic location for outdoor activities.”

The winner will be announced at the close of the Zoom Cymru festival- but Andy can’t be present- as he has a prior commitment filming a music video with a local band in Newborough.