Whilst most of us would find running a business challenging, a Bangor University student also studied for her degree at the same time. Rebecca Orford, 21, from Llanfairpwll, graduated with a BSc Environmental Conservation degree this week. 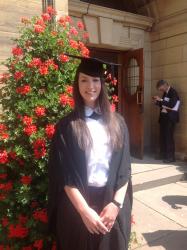 Rebecca said: “Coming from a self-employed family, I have always appreciated the importance of succeeding in areas where you are strongest and being aware of your abilities equally as much as areas where you need to improve. From an early age I was fascinated with the great outdoors and spent countless hours at my local riding school and livery yard where from 11 years old I worked as a stable girl.

“My family were always encouraging of my love of the outdoors with day trips and holidays to the Lake District and Wales and in 2008 we moved to a sheep farm on the Isle of Anglesey. After attending the sixth form at Ysgol David Hughes I ventured off to the Royal Agricultural University in Cirencester where I gained qualifications such as my chainsaw licence. However, Wales pulled me back and having heard how good the School of Environment, Natural Resources and Geography at Bangor University was, I decided to apply and joined in the second year. It’s situated in a wonderful location to study environmental conservation with the magnificent surrounding area of north Wales.

“During my first year at University, I held a part-time job working weekends at James Pringle Weavers in Llanfairpwll. In the summer of 2012 I travelled to New York to teach horse riding at a summer camp for 10 weeks, this was an amazing experience and allowed me to gain experience in teaching various abilities. When I returned from America I came across the opportunity to take over a local business which consisted of a café and gift shop within a garden centre.

“Although I was about to embark on my final and critical year of University, I believed that I could manage both and was encouraged by my parents. I took over the business in October and returned to University the same month. I had to balance time very carefully and ensure that I had staff cover when I needed to attend lectures. It was quite tiring working seven days a week in the café and then having University work to complete on top. I was often found in the café with a table full of coursework, jumping up every 10 minutes to make coffees.

“Customers would often come in to see how I was getting on which was lovely to have their support. Many late nights were spent in the library keeping up with studies and completing coursework, however, determination to succeed at both kept me going. As University commitments grew towards the end of the academic year, I had to hire more staff to cover me, this increased my responsibilities, however, I greatly enjoyed training new people.

“When I took over the café it had been awarded a 3 star rating by the local authority, however as the business had changed hands this gave me the chance to have a new inspection. In the same week that I was awarded a 2i degree, I also discovered that I had achieved a 5 star rating for the café which is the highest that can be given. I was delighted that both of my efforts over the last year had been recognised and felt a huge sense of pride that I had managed this without compromise in either aspect when many people had told me it would not be possible.

“In my first year at Bangor, I also took part in a City & Guilds part-time course in Stable Management and Riding on top of my studies. This was based at my local riding centre and was a great addition to University as it kept me very busy completing work sheets, evidence collecting and practical days every Tuesday. I was also a member the Bangor University Riding Club.

“Although I have worked hard in Wales and established my business over the last year I am keen to relocate back to the North West of England. After completing a recruitment process I have been offered an exciting job at Fairbanks Environmental as a wetstock data analyst which I will start in September. In this role I will work with a team monitoring fuel levels at petrol stations around the world for large distributing companies such as shell and BP.  This monitoring allows detection of any problems such as fuel theft or potentially environmental damaging tank leaks which can pollute ground water.”