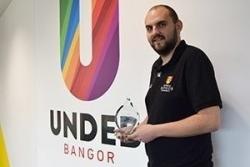 Matt Day, 23, from Southampton won a sponsored bursary for outstanding contribution in the NUS National Societies Awards, which is the first national event to credit societies for their contribution to students’ career prospects and experience during their time at university.

Matt is currently doing a PGCE in Secondary Science at the School of Education and graduated with an MEng Electronic Engineering degree from the School of Electronic Engineering in 2015. He has worked with the Stage Crew Society (now called Titan Sounds and Light) and has developed the society to a widely used bigger and better society that supports the majority of student and University events.

Matt said: “I am absolutely thrilled with winning the award, it’s really good to be recognised on the national level, I can only say thank you to the nominators and well done to the tough competition I was against. The evening was a great experience learning about what societies from other universities did and being able to gain some good ideas to hopefully bring to Bangor when I start my role in the Union.”

Beth Button, President NUS Wales said: “The strength and quality of the nominations received is testament to the hard work that Students’ unions do and the breadth of unions that nominated and won is indicative of the valuable work and overall strength of the Student movement in Wales this year.”

Matt and the society was awarded a cash prize as well as the invaluable experience of attending the award ceremony which was held at the University of West England.

Matt will be part of the Students’ Union full-time Sabbatical Officer Team during the 2016-2017 academic year.