The history of the European marine environment during the past thousand years is the target of a €3.1 million (£2.6 million) project, funded by the European Union and led by scientists from School of Ocean Sciences at Bangor University.  The project, which also involves researchers from Norway, Germany, France, Croatia, Portugal and the Netherlands, will use the shells of very long-lived molluscs as a record of environmental change over the past thousand years.  It builds on research originally developed at Bangor by Professor James Scourse and Professor Chris Richardson that led in 2007 to the discovery of the longest-lived animal known to science – a clam from Iceland that had lived for 507 years.

“We’re delighted with this award”, said Dr Paul Butler of School of Ocean Sciences, who will coordinate the project with Professor Scourse. “It’s very encouraging that the potential of this new and exciting approach to climate research has at last been recognized.” 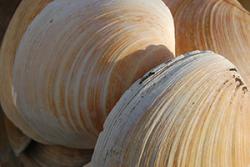 Ocean Quahog clam shells, showing the growth rings on each shell.Seashells retain evidence of marine conditions at the time they were produced and can thus provide a unique insight into the history of the seas and oceans. They also mark each year with a visible growth ring (like trees), so the timing of environmental changes can be known with very high precision. The use of shells from exceptionally long-lived animals allows scientists to investigate the marine environment over periods of hundreds of years, potentially spanning the whole period during which humans have been making use of the European shelf seas.

“Historically, Europeans have relied on the oceans, initially for trade and conquest, then as a source of food and most recently as a source of energy”, said Dr Butler.  “Our use of the oceans has become much more intensive in the past few decades, and this pressure is additional to the effects of rapid climate change. We need to be able to disentangle the complex combined effects of climate change and human use over the long term, so we can distinguish between natural background variation and changes caused by humans. That will help us to predict more accurately changes in the marine climate system over the next few decades, so helping governments and industry to take the best policy decisions.”

The new project – called ARAMACC – will train ten PhD students in the skills associated with the interpretation of the shell record.  “We have geologists, oceanographers, biologists and climate modelers involved in ARAMACC”, said Dr Butler, “so the students will get practical experience and expert training in a wide range of relevant scientific fields. In addition they will be trained in the skills required for research at sea when they join shell collection cruises to the west of Scotland and to the Faroe Islands.”

Bangor’s School of Ocean Sciences, which only recently hosted an international conference on the science of shell-ring research, is an acknowledged world leader in this field, and the new funding will make it the leading centre for the training of the next generation of shell-ring researchers.

The four year Marie Curie Initial Training Network (ITN) project, funded through the EU's Framework Programme 7, will see an investment of around £600,000 come to Bangor University.