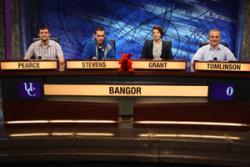 Representing Bangor University in this, the ultimate quiz show, were a team selected from over 100 students who took part in the initial trials. They were:

The Team went through a selection process that included several rounds of questioning, both at Bangor and at the Granada TV studios in Manchester and are now looking forward to competing in the second round.