Bangor welcomes guest lecturers from the University of Cádiz

Professor del Valle Galvez of the University of Cádiz and his colleague associate, Professor Inmaculada Gonzalez Garcia, recently visited the Law School, and delivered a fascinating series of seminars on the Anglo-Spanish dispute over 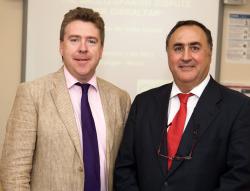 Prof. del Valle Galvez, Professor of Public International Law and International Relations at the University of Cadiz/Jean Monnet Chair on Borders and Immigration in European Union Law, on a recent visit to the Law School with Dean Cahill.Gibraltar. Since the ceding of the Rock of Gibraltar under the Treaty of Utrecht in 1713, there has been controversy between Spain and the United Kingdom over the sovereignty of Gibraltar. Gibraltar has a special status within the European Union, since, as a European territory, it is represented by the United Kingdom, but yet falls outside much of the reach of EU Law, such as the Internal Market regime, and also the Schengen area for the free movement of persons.

In a fascinating seminar, Professor del Valle Galvez examined a number of initiatives and processes that have been launched bilaterally by Spain and the United Kingdom, including the Lisbon Declaration (1980), the Brussels Communique (1984), the Trilateral Forum of Dialogue (2004), etc; and also the recent deadlock in negotiations between the UK, Spain and Gibraltar.

Professor Inmaculada Gonzalez Garcia examined issues concerning the waters around Gibraltar, and the disputes that are arising therein between the two countries. 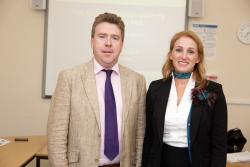 Professor Cahill with Professor Inmaculada Gonzalez Garcia, who gave a fascinating seminar on the Legal Disputes between Britain and Spain on the water around the Rock of Gibraltar.overlapping in the waters surrounding Gibraltar, and that these designations, although overlapping, have been accepted by the European Commission, thereby further deepening the complexity of the issues.