There is apparently a connection between, beer, bread and better health- and that connection is yeast. 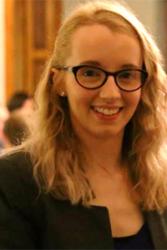 Jessica FletcherJessica Fletcher, a scientist from Bangor University, will be explaining to the public what that connection is in a Soapbox Science’ event at Swansea University on Saturday 6 June.

Jessica, who is 27 years old, and comes originally from Wallasey on the Wirral explains:

“In my research, I use a simple model organism to study cellular processes which can then be applied to human cells.  My research organism is a yeast called Schizosaccharomyces pombe whilst another popular yeast used in research is Saccharomyces cerevisiae, more commonly known as baker’s yeast! In my Soapbox Science talk: ‘Super Yeast: Beer, Bread and Better Health’, I will describe how the same yeast used in bread baking and beer fermentation is used to study diseases such as cancer.”

“As we grow, our cells divide, and during this process they must accurately copy their DNA. If the DNA is damaged, we would not want our cell to continue dividing without repairing this damage first, as this could lead to disease. Cells have checkpoints which exist to try and make sure that damage to DNA is repaired before it is copied. I study a protein in this checkpoint called ‘Cds1’, or ‘Checking DNA Synthesis 1’.”

“I wanted to get involved in Soapbox Science as I feel it is a fantastic opportunity not only to extol the virtues of the humble yeast, but as a platform to inform the public and encourage other young women to pursue careers in science. Whilst the Women in Science movement has come a long way, women are still underrepresented in the STEMM subjects, particularly in media and social network outlets. The majority of my classmates on my undergraduate course were female, yet in my postgraduate life most of my colleagues are male; this imbalance is reflected in many areas of STEMM subjects in Higher Education and Academia. Individuals should be able to pursue any career they are passionate about, and not feel discriminated or discredited for any reason, gender or otherwise. Progression into research felt like a natural step for me, and so I was delighted to be selected to take part in Soapbox Science to have the opportunity to encourage other young women to take the same step and follow their passion for science.”

Jessica is a Tutor and Teaching Associate at Bangor University’s School of Medical Sciences as well as a PhD student in Cancer Research at the University. She has a BSc in Biomedical Science, and is a registered Biomedical Scientist and an Associate Fellow of the Higher Education Academy.  My teaching focuses on human biology and how the body works in health, whilst my research is focussed on cellular genetics and DNA damage, in order to provide a better understanding of the human cell cycle and cancer development.