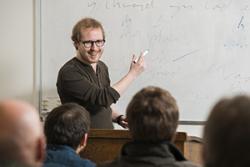 Elis DafyddThe Bangor University student experience was the inspiration behind one of the volumes that reached the shortlist for last year’s Welsh Book of the Year competition.

Elis Dafydd’s creative writing portfolio of 15 poems – his first every volume - were part of Chwilio am Dân (Searching for Fire), which reached the poetry shortlist.

"These are poems from my University days," he said. "The poems arose from my experience as a student in Bangor, going out with friends, falling in love and youth culture."

He’s now capturing more experiences as he undertakes a PhD at the School of Welsh on the work of the novelist and critic, John Rowlands.

One of those experiences was travelling to Poland for a conference about Celtic culture and to give a lecture on one of the most troubled Welsh literature events of the second half of the twentieth century.

Between lectures on topics such as verb terminations and old Irish, Elis talked about how the novel Ienctid yw Mhechod (Youth is my sin), with its bold description of sex, rocked the Welsh institution in the 60s.

"John Rowlands was the nearest thing we had to an 'angry young man'," said Elis. "Although his novels have dated, they were important as their impact was so far-reaching."

Elis argues that John Rowlands – a Bangor University School of Welsh alumus - has helped open a new chapter in the novel’s history, but his feat has been somewhat overshadowed due to the enormity of his critical work and humility.

Another valuable experience to Elis is taking tutorials and seminars with current students – it’s good discipline, he says, as he’s almost halfway through his research.