This article by David Styles, Lecturer in Carbon Footprinting, Bangor University was originally published on The Conversation. Read the original article.

Drax, the UK’s largest power station, burns coal and wood. : Jonathan Kershaw CC by 2.0Last year, 6m tonnes of “wood pellets” harvested from forests in Louisiana, Georgia, Florida, Alabama and Virginia were shipped across the Atlantic, to be burnt in renewable “biomass” power plants. This was almost double the 2013 figure – the US “wood pellet” industry is booming.

Demand is largely driven by European countries wanting to meet targets set out in the EU’s Renewable Energy Directive. Half of the pellets exported from the US were used to generate electricity in Britain’s massive Drax power station, which is slowly converting from coal to biomass in order to reduce carbon emissions and claim valuable “Renewable Obligation certificates” for green electricity. So can it really be sustainable to transport wood halfway round the world to burn in a power station?

Many environmentalists don’t think so. A consortium of NGOs recently argued that the EU should exclude wood from its renewable energy targets. They claim the industry is felling large areas of hardwood wetland forests across the south-eastern US, causing a loss of biodiversity and a net increase in carbon emissions. Even when the forest regrows it does not store as much carbon in biomass and soils as the original – and it’s certainly not as good for wildlife.

A UK government study found that electricity generated from regenerated forests could have a carbon intensity five times higher than coal. Burning wood also releases nitrogen oxides and carcinogenic compounds. So why burn wood to meet renewable electricity targets when cleaner options such as wind, solar, hydro or tidal power have a much lower environmental impact?

Wood power is a stopgap

Wind and solar power are already expanding rapidly and will be key in future, especially as we get better at storing energy. But in the meantime, these clean but intermittent power sources can’t yet replace coal.

Coal produces 39% the world’s electricity, alongside a third of all carbon dioxide emissions and a wide range of other toxic emissions. Yet for all its faults coal has two big advantages: it’s cheap, and it can operate continuously to provide a minimum “baseload” level of electricity.

It’s relatively easy to modify a coal plant to burn wood instead – fuel handling and injection systems need to be adapted to handle the wood pellets instead of pulverised coal, but the combustion process is otherwise similar. It’s a quick and comparatively cheap way to shift towards renewables.

For this to be worthwhile however, the amount of carbon emitted by extracting, processing, transporting and burning wood pellets must be significantly less per unit of power (MWh) generated than the equivalent for coal. This can be ascertained through carbon accounting, or “life cycle assessment”.

The life of a wood pellet

Perhaps surprisingly, trucking wood pellets 200km to a port and transporting them 7200km by ship isn’t a deal-breaker in terms of carbon emissions. Sin 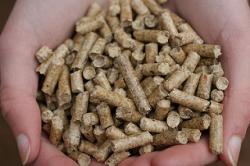 Wood is turned into ‘pellets’ before being shipped away and eventually burnt. : Andrew_Writer, CC BYe large ships carry massive cargoes efficiently at low speed, transport contributes around 40kg CO2 per MWh electricity generated. Significantly more carbon (more than 100kg per MWh) is emitted by the drying, grinding down and shaping required to transform harvested wood into small, easy-to-handle pellets.

Even this still has a far lower carbon intensity than UK coal though, so transport and processing clearly doesn’t stop wood power being a sustainable option. But here’s where it gets complicated.

Whereas burning coal releases carbon that had been stored in the ground for millions of years, CO2 emissions from burning wood are part of a continuous biological cycle. Carbon in wood was only recently taken out of the atmosphere through photosynthesis, and replacement tree growth will suck it back out again.

However the time taken to replace that carbon varies hugely depending on whether you’re harvesting large trees from ancient forests, or small branches from new plantations. We also have to consider how these American forests would have been managed without any wood pellet demand.

The government study notes that wood from intensively-managed plantations could mean more carbon taken up by growing trees than emitted by the transport and processing of the pellets, leading to a net reduction in emissions even before avoided coal emissions are accounted for. Conversely, as referred to earlier, the study found that if wood pellets are sourced from regenerated natural forests, carbon emissions could be five times higher than from burning coal. So the type of wood that is burned is crucial. What’s the most likely effect?

Fortunately America has lots of spare wood lying around that would otherwise be burned or wasted. Drax and other big players claim their pellets are sourced from such “forest residue” – saw-mill scraps, trees that died naturally, or were too misshapen to be used as lumber, small twigs, and so on – though environmental groups dispute this. 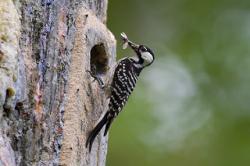 The red-cockaded woodpecker is one of many threatened species that live in these woods.: US FWS, CC BYWhatever the truth right now, there’s certainly lots of potential in wasted wood. Between 14% and 63% of the currently spare forest residue in the US would be sufficient to meet the UK’s entire biomass demand in 2020. A recent academic paper suggested that even after accounting for possible forest carbon loss, electricity generated from US wood pellets is still far cleaner than coal.

There are some regulatory safeguards in place too. Power station operators need to prove that electricity generated from wood is clean enough to count as “renewable” in terms of UK and EU policy. The worry here is that increasing demand from the well-regulated European energy sector could displace existing wood demand from unregulated sectors towards unsustainable sources such as pristine forests.

Ultimately, the environment would benefit more if American wood was used at home to reduce the huge quantities of coal burned there, and European rural economies would benefit more if renewable energy targets were met using local wood. But in the meantime, US forests provide a cheap source of wood pellets for European power generators to meet renewable energy and carbon reduction targets.

It’s not the long-term goal of 100% clean, renewable energy that humankind is capable of achieving but, from where we are right now, it’s a step in the right direction.

Wood is turned into ‘pellets’ before being shipped away and eventually burnt. Andrew_Writer, CC BY

The red-cockaded woodpecker is one of many threatened species that live in these woods. US FWS, CC BY