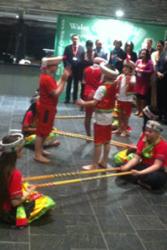 Dr Wei Shi, the Director of the Confucius Institute at Bangor University, was among those invited to attend a Chinese New Year Reception in the Senedd  Building of the Welsh Government in Cardiff recently. First Minister of Wales Rt Hon Carwyn Jones AM and His Excellency Liu Xiaoming from the Chinese Embassy welcomed around 200 guests from across Wales. The Chinese New Year this year was on 10th February, which is the Year of the Snake.

The Chinese Ambassador gave a complementary speech. This was followed by a Chinese Lion Dance, after which pupils from Lansdowne Primary School in Cardiff performed a traditional Bamboo dance.