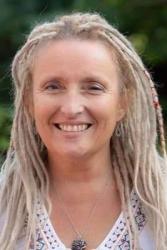 Creative and Professional Writing student Aly Shields has penned and recorded a charity song.Aly Shields, a mature Bangor University student and carer from Llandudno, has launched a record in aid of PANS PANDAS UK, a charity which raise awareness of little known and understood conditions which often lead to miss-diagnosis for the people concerned, and which supports them and their families.

Aly’s song Warriors is available on iTunes and Google Play for around £1 ($1.29). Search for Warriors and PANS PANDAS UK.

PANS and PANDAS describe a variety of neuro-psychiatric conditions such as OCD, tics and eating disorders which are triggered by a misdirected immune response which results in an inflammation of a child's brain. They can often go undiagnosed.

Aly describes how the condition affected her son:

“Almost nine years ago my son became seriously ill. I found the condition Pans Pandas which fitted all his symptoms, printed of the information and gave them to a clinician who was caring for my son. The information was not acted on and at that time there was nowhere else to turn other than the United States, but I had no money for us to get there.

A year ago, I was told my son would remain on medication for the rest of his life. This was unacceptable so I began to research again, and during that research I found Pans Pandas again, but this time there was an oasis in what was yet again our darkest hour, that oasis was PANS PANDAS UK.  My son had been misdiagnosed for all these years when all along he had a treatable condition, and consequently he has missed all his teenage years. He has watched all his friends go off to University while he could barely leave the house.

The situation for Aly and her son has improved, and her son is on the road to recovery. She explains:

“With support from PANS PANDAS UK I have been empowered to prove my son’s case and he is now receiving some treatment, will be having an operation and I have won NHS funding for him to see a specialist this month in London. The treatment began in June with full time antibiotics and by August he was able to spend a week sailing in the Irish Sea.  This will be a long road to recovery as he was not correctly treated when he had the initial onset. I am now actively seeking families who may be affected by Pans Pandas in Wales.

A students with disabilities herself, and a carer for her son, Aly applied her creative talents to writing the song at the request of Georgia Tuckey, the charity Chairperson, who knew of Aly’s creative background both as a singer and in using theatre to present and discuss difficult social issues with school children.

Aly says: “I wrote Warriors that day and sent an extremely rough recording of it to Georgia (Chair PPUK). She is exceptionally busy fighting for families and I didn’t hear anything for two days and thought, ‘It must be really awful’. Then she rang in tears and conveyed that the lyrics reflected how parents and children feel.”

“WARRIORS represents the experience of other families struggling to access the "system" on behalf of their children as well as describing the tragedy of the symptoms, it bears great resonance for the families involved with caring for their children in such dire circumstances.” 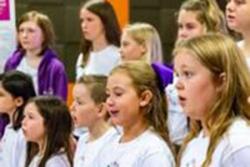 Some of the PhilsHarmonics choir members who contributed to the recording.: Image credit & copyright Mike ShieldsAly continues: “The song is a parent speaking to their child and later the voice of the child. We have a children’s choir from Holywell, called PhilsHarmonics, singing on the single along with a short piece of rap. This wonderful choir sang their hearts out at the recording on behalf of children who are too poorly to have a voice.

“I have begged and borrowed! (but no stealing like in the song!) to get this record made. From borrowing a guitar to getting help from my Dad to put together a videos of stills to accompany the song.

I approached Russ Hayes at Orange Studios in Penmaenmawr as he had come highly recommended, and they were not wrong, he has been amazing.

Explaining why she penned Warriors, she says:

“Of course, the charity needs funds to continue their work and we want the song to raise money, but raising awareness is crucial. Families have children with this condition, yet they do not have knowledge that Pans Pandas exists, we need to reach out to them. Health professionals must be made aware of the devastating consequences of children, young people and young adults being misdiagnosed with a mental illness when they have a treatable physical condition. Also crucial is research into Pans Pandas. As yet, there is very little research in the UK, which is quite astonishing considering (in my opinion) that the implications of these conditions could change the direction of psychiatry and how certain mental health conditions are viewed. “

Aly is also channelling her creative energies into studying a degree in Creative and Professional Writing at Bangor University. She also writes screenplays, and is using her and others’ experiences of PANS and Pandas as material, and would like to be a published writer.

She says of her University experience:

“Although Bangor is the closest university to me, it was the most attractive option and choice of degree which includes screenwriting which I particularly wanted to study.

“I love the diversity of university and it has allowed me the opportunity to build a new life after having to give up my business to become a carer. In addition, I am so grateful for the support I have received, both as a carer and disabled student (Dyslexia and Fibromyalgia).”