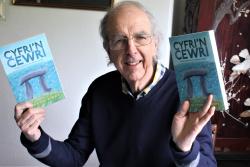 Professor Roberts' book has now reached book-shops!Professor Gareth Roberts who is well-known for his Welsh language work to popularise mathematics, and who is a former Pro Vice-Chancellor of Bangor University has a new book published.

The book builds on Llewelyn Gwyn Chambers’ work Mathemategwyr Cymru (Cardiff, 1994). Previously a Reader in the Department of Mathematics at Bangor, he set out the history of some 70 Welsh mathematicians.

In Cyfri’n Cewri, Gareth Ffowc Roberts presents the life and work of a dozen prominent mathematicians born in Wales or who accomplished much of their work in Wales. The book’s main thesis is that mathematics is an integral part of our history and culture.

Of particular interest to Bangor University, one of the chapters in Cyfri’n Cewri is devoted to George Hartley Bryan (1864-1928), Head of the Department of Mathematics at Bangor from 1896 to 1925. Bryan was a genius in his field and was the author of Stability in Aviation in 1911, a work that sets out the basic principles of the technology of flight, for which he was awarded the Gold Medal of the Royal Aeronautical Society and other honours. However, Bryan’s eccentric behaviour did little to endear him to the college authorities at the time. As a result, his achievements were neither appreciated nor understood, as demonstrated by Professor Jim Boyd when delivering the Ballard Mathews Public Lecture in the college in 2011 under the title ‘Prophet without Honour’. 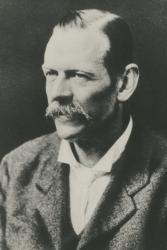 George Hartley Bryan (1864-1928)Dr Thomas Richards (Doc Tom), later University Librarian, was a student in Bryan’s class and witnessed his behaviour at first hand. In a radio broadcast in 1953, titled Doctor Bryan, Richards elaborated on his memories of Bryan as a lecturer. The chapter on Bryan in Cyfri’n Cewri quotes from the programme’s script, which had not seen the light of day for many years, and compares Bryan’s fate with the fame of Sir John Morris-Jones, his contemporary in Bangor.

Emeritus Professor Gareth Ffowc Roberts was a lecturer in mathematics at the Normal College (1988-94) and Principal of the Normal College (1994-96). He was also Pro Vice-Chancellor and Head of the University's School of Education (1996-2005). In 2010 he was awarded the Science and Technology Medal by the National Eisteddfod for his work in mathematics. He is a Fellow of Bangor University, the Coleg Cymraeg Cenedlaethol and the Learned Society of Wales.

Cyfri’n Cewri is published in Welsh by the University of Wales Press and will be adapted into English in due course.