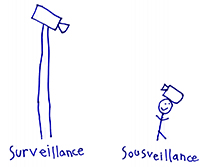 Funded by the UK’s Economic and Social Research Council, Dr. Vian Bakir of Bangor University is leading a team of interdisciplinary researchers from across the UK. Together they are hosting seminars at Bangor, King’s College London, Sheffield, Brunel and Aberystwyth to explore life after the Snowden leaks of 2013 (that disclosed intelligence agencies’ mass surveillance of regular citizens).

Although impetus comes from the Snowden leaks, we are interested in the overall rise of watching, recording, processing and leaking of information about people by businesses, public services and security services. We’re also interested in how we watching each other through social media and newer technologies such as Google Glass. We are thus addressing a society-wide increase in information transparency and lack about personal choice on information disclosure.

To unpack, explore and debate these issues, delegates and attendees are coming from around the world. In addition to world-leading academics, these include technology start-ups from Silicon Valley, politicians, European data protection regulators, representatives of the UK’s Information Commissioner’s Office, data security companies, cryptographers, a world-leading ethical hacker, digital artists, representatives of privacy activist groups, among many others. Avoiding one-sided debates, we explore this premise in relation to privacy, security, surveillance and trust.

Our first seminar, Transparency Today: Exploring the Adequacy of Sur/Sous/Veillance Theory and Practice, is on 6th January 2015 at Bangor University. Our keynotes are Professor Kirstie Ball, The Open University (world-leading expert in organisations and surveillance) and Professor Steve Mann, University of Toronto (‘father’ of wearable technology and expert on ‘sousveillance’, or watching the watchers). End users include a San Francisco start-up company that sends tiny satellites into space to take photos of the planet, a digital artist and a world-renowned ethical hacker. Between these, we expect a very lively debate. Outcomes and views will be posted on the project website: http://data-psst.bangor.ac.uk/index.php.en