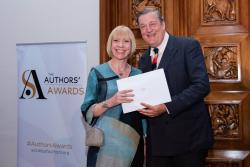 Dr Zoë Skoulding was presented the Awards by actor, Stephen Fry.: Copyright: Adrian Pope Photographer London UKDr Zoë Skoulding, poet and Reader in Creative Writing at Bangor University, has received a Cholmondeley Award for the achievement and distinction of her body of work and her contribution to poetry.

Judge Rod Mengham remarked: “She sends the language of the senses over the frontiers where most poems stop short.” The prize was presented by Stephen Fry at the Society of Authors Awards recently.

Dr Skoulding has published five collections of poetry, including Teint (Hafan Books, 2016), The Museum of Disappearing Sounds (Seren, 2013), which was shortlisted for the Ted Hughes Award for New Work in Poetry, and Remains of a Future City (Seren, 2008), which was long-listed for Wales Book of the Year. Her poems have been translated into nearly thirty different languages and she has performed at major poetry festivals across Latin America, India and Europe.

Alongside her own writing, Dr Skoulding has also published translations and critical studies of poetry, and has edited anthologies and essay collections. She was Editor of Poetry Wales 2008-14 and was Artistic Director of the North Wales International Poetry Festival 2012-2016. She has recently led an international network, funded by the Arts and Humanities Research Council, on Poetry in Expanded Translation.

“I am delighted to receive this award because the selection was made by poets I admire, and the list of previous winners since 1966 is one I’m very proud to join – it includes my colleague Carol Rumens here at Bangor, Robert Minhinnick, my predecessor at Poetry Wales, and many other poets whose work has been important to me, such as Tom Raworth, Lee Harwood, John James, Denise Riley, Caroline Bergvall, and my fellow winners this year Vahni Capildeo and Linton Kwesi Johnson. People tend to think of poetry as a solitary art but in fact it forms strong connections that awards like this make visible.”